Cork is out of the bottle as BRC heads to Ireland

The British Rally Championship got underway last month, with the Cambrian Rally providing a heart-pumping opening round of the new-look season. After the gravel trail-blaze through the forests of North Wales, the focus now switches to Tarmac for the Clonakilty Park Hotel West Cork Rally (16/17 March) – the second round on the calendar.

Britain’s premier rallying series will visit West Cork in the Republic of Ireland for the first time in its 61-year history, with the current BRC championship protagonists set to do battle over two days through the legendary Irish lanes. Fifteen speed tests, including an exciting street stage, will equate to 140 competitive miles, which will provide the challenge on St Patrick’s weekend.

Defending British Rally Champion Matt Edwards got his title defence off to the best possible start with a commanding triumph on home soil – wrapping up his first Cambrian Rally victory with new co-driver Patrick Walsh. The M-Sport driver has a spring in his step and can’t be discounted from fighting at the very front in Cork as the Pirelli-shod Fiesta R5 man won the last event across the Irish Sea in 2018.

Hunting Edwards down will be 2011 Champion David Bogie and Irish co-driver John Rowan in their Skoda Fabia R5. After collecting a good haul of points with a fine second in Wales, Bogie heads to the sealed-surface in search of another BRC win. The Flying Scotsman completed the non-championship Birr Stages as a warm-up, as he goes in search of his fourth R5 BRC podium on Irish soil in as many years.

Fellow Fabia R5 driver Marty McCormack from Draperstown rounded out the podium proceedings in Wales and will lead the Irish charge for BRC honours this weekend. With new co-driver Barney Mitchell, McCormack will be seeking another podium to keep his title assault on-track before his preferred events later in the season.

Reigning Irish Tarmac Champion Josh Moffett is dovetailing both championships this season in his Ford Fiesta R5, and a win with Keith Moriarty on the notes in Clonakilty would keep both title tilts on-course for the Michelin-backed Monaghan driver.

Desi Henry from Portglenone claimed fourth on the opening round and – along with Liam Moynihan – will be revelling at the thought of fighting for a rostrum on home soil in his Skoda Fabia R5. Jonny Greer (Belfast) and Scottish co-driver Kirsty Riddick were lying seventh on the Cambrian, however radiator woes forced them out of retirement on the way to the finish. Greer is a Tarmac specialist and will delight in threading the Fiesta R5 down the Irish lanes as he goes in search of his first BRC win.

BRC newcomer Brendan Cumiskey (Monaghan) notched up his first set of points on the Cambrian and will look to better seventh on the roads south-west of Cork with Ronan O’Kane. Tom Cave was fighting for a podium on home soil in his Hyundai i20 R5. On the last stage, the Welsh driver was struck a cruel blow when two punctures denied him the chance of making it back to Llandudno to spray the champagne. Ever the optimist, the Cave is ready to fight again and can never be discounted from the fight for victory.

Fellow countrymen Meirion Evans and Jonathan Jackson – also in a Hyundai i20 R5 – enjoyed their first experience of the BRC top-flight on the Cambrian following two years in the junior category. After a last-minute series registration, the pair went on to finish sixth and now look to break into the top five across the Irish Sea.

Alex Laffey and Stuart Loudon (Fiesta R5) secured a top ten in Wales and will be eager to show their Tarmac form, as they push for a podium while Sacha Kakad and James Aldridge in another Fiesta R5 will visit West Cork for the first time in search of their first BRC points of 2019.

Iain Campbell – BRC Championship Manager said:
“The West Cork Rally is a rally revered by many around the world and we are delighted to have the event as part of the British Rally Championship. With classic tests and famous stages offering a unique challenge, the advantage surely must swing to the Irish drivers. Reigning Irish Tarmac Champion Josh Moffett is our first BRC driver on the road, and as much as he would love to take the fight to Craig Breen – Josh will be thinking about the BRC points and a BRC win – as will fellow Irish drivers Marty McCormack and Desi Henry. Matt Edwards will be seeking his first win in Cork to stretch his lead in the series standings. However, David Bogie and Tom Cave go well on the Tarmac and could spring a surprise on the overall classification. It’s going to be an exciting contest!” 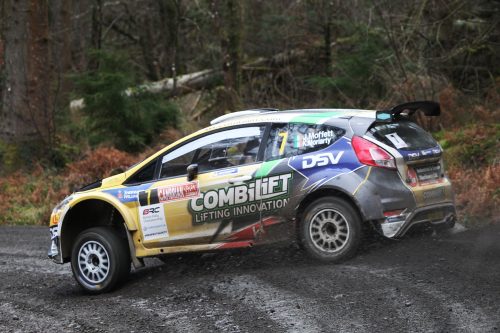