Consistency the key for Nabila

DMACK Junior British Rally Championship driver Nabila Tejpar has had a solid start to her first season in Britain’s premier rallying championship. Tejpar has scored points in every BRC round to date with a career-best finish of fourth on the daunting Circuit of Ireland earlier in the year. We caught up with Ford Fiesta R2 driver to hear her thoughts on the season so far.

“It’s been a crazy year to be honest. We have certainly jumped in right at the deep end,” enthused Nabila. “We decided at the end of last year to enter the BRC after only doing five single-venue rallies – we decided to take the massive step up and do a full, major championship.

“I didn’t expect to be picking up points especially on the first event in Mid Wales with the strong competition there. To take fourth on the Circuit of Ireland was amazing. Just wish I had played my “Joker”! I was absolutely gutted, If only I had known the Circuit would take that many prisoners!

“I was taking the tortoise and hare approach as I just wanted to finish. To miss the podium was gutting as we lost our intercom, which meant I lost my confidence for a few stages, especially when coming into tight corners! We could have held it, had it not been for the failure but Adam [Bustard] knows the stages well and he was flying so it was a shame to just miss out.”

The Woodham Mortimer-based driver has had a lot to absorb in such a short space of time and all hasn’t gone to plan so far this season.

“We had an all-female team lined up for the start of the season and shortly before the first round my co-driver became ill, which meant I had to find a replacement. Luckily, I did but it was just before Ireland where we struggled as a lot of people had already booked themselves a seat for the event and the season ahead.

“I have learnt a lot, having a different co-driver every round which helps me learn from a variety of experienced people but it has been difficult, on the flip side, as I’ve had to relay my style several times – it takes time to gel.”

With limited experience behind the wheel, Tejpar took the plunge and acquired a Ford Fiesta R2, a real pocket-rocket designed to fly through the toughest of stages. These potent rallying machines take time to adjust when tackling iconic events such as the Pirelli Rally.

“I know the car a lot better now after three events. It is a proper piece of kit and I fell in love with it very quickly. I am used to driving on the left as I lived in America for a while, but the gearbox took time to get used to. It is such a strong mechanical movement and if you don’t get enough leverage on it, it just won’t work. I will admit, I am not as strong as the guys and never will be so I had to work on the technique it to make it natural – now it is second nature. It always puts a smile on my face when I pull a gear.”

The R2 Fiesta is not only a proven dirt-slinging machine, as Tejpar’s car to the eagle-eyed carries a nod to a very famous BRC livery of old.

“My dad bought Ari Vatanen’s Allied Polymer Escort Mk2 and that’s one of his most prized possessions as Vatanen was his hero. When doing the Eifel Rallye in Germany we got thinking about Allied Polymer and after a Google search we soon discovered the name was available for £50, so we bought the company! With the BRC returning, it was great to bring back the Allied Polymer name to the series and on a Ford as well which makes it even more special.”

Tejpar is continuing to develop in the DMACK Junior and is revelling in the challenges the seven-round series offers.

“Being the only female driver in the BRC is unique and helpful for attracting sponsors but to me it doesn’t matter whether you are female or male. If you can do the job, that’s all that matters. My goal is to stay in the top 10 in the championship as to end my first full season in rallying and a top 10 in the DMACK Junior BRC would be incredible!

“The publicity was a major draw for us to do the BRC. Having its own Junior championship makes it even more special and made it more attractive for sponsors and supporters who are backing me. We heard about the BRC reformation and finding an R2 car came shortly afterwards, so it was a natural choice. Yes it is a steep learning curve but I feel I am progressing and most importantly I am really enjoying it.”

Nabila and the other BRC crews head to Scotland for round four of the series next week. 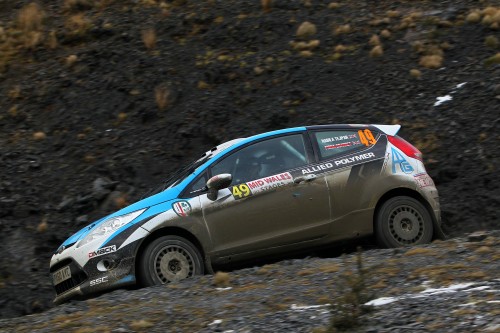