Connor heads to the Woods for BRC debut

Northern Irishman Connor Woods is the latest driver to sign-up to the Prestone MSA British Rally Championship as he climbs into a Vauxhall ADAM Cup to contest the fiercely competitive Cadet Cup this season.

21-year-old Woods will undertake a selected campaign in the ADAM Cup pocket-rocket, starting with the first round – the upcoming Pirelli International Rally.

“I always wanted to enter the BRC and it is a dream come true,” enthused Woods. “I have never competed outside of Ireland and the BRC is the most high profile series in the UK and the ADAM Cup car was a great option to start my journey. It all started last year as I was servicing for Marty Gallagher. I got hooked on the whole current BRC format and from that moment on I just had to be lining up for the first round. I want to get going tomorrow if I could”

The Ulsterman will bring the first ADAM Cup to the series in 2018 and will go head-to-head with the older specification Ford Fiesta R2s in the action-packed Cadet Cup. With his first event just two weeks away, Connor is relishing his first BRC event.

“I haven’t driven the car yet so our first run will be Shakedown just before the event. I have driven a left-hand-drive road car for abit, just to get used to that side of the car but as far as I am concerned it has three pedals and a steering wheel. That’s all I need to enjoy it and get a good feeling for the first event!

“Hopefully we can mix it in the Cadet Cup as the competition looks pretty good this year once again. I will do what I can as I don’t know what to expect and how the ADAM will go against the more established Fiesta.”

As for the rest of his campaign, Woods is looking forward to the Tarmac in the latter part of the year.

“At the minute I won’t be going to Belgium as I don’t think I have enough experience to go to such a specialist event. I will, however be doing the Ulster and Isle of Man. Those are the two I am relishing as they are both amazing events.” 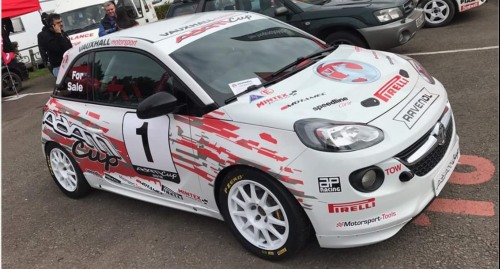