The British Rally Championship has confirmed that it will add the Rally Isle of Man and the Nicky Grist Stages to its 2016 calendar, replacing the Jim Clark Rally and the Granite City Rally.

The Manx is one of the most famous names in rallying and has been a BRC round for most of the Championship’s history; it will provide a fitting series showdown in September. The Nicky Grist Stages, based around Builth Wells Showground, has never featured before and will provide the first two-day mixed surface event in the Championship since 1987.

Return of the Welsh

The Nicky Grist Stages – organised by the Quinton Motor Club and by the co-driver who lends his name to the event – will run in similar format to the 80’s edition of the Welsh International Rally which ran gravel stages in the Welsh forests and on asphalt over the Epynt Military ranges, which have been secured for the July 9-10 event.

Legendary WRC co-driver Nicky Grist believes the event will provide a unique challenge for the competitors.

“It’s something that we’ve not seen for many years,” said Grist. “The location that we’ve got is absolutely perfect for it. All told, it’s going to be interesting, a break from the norm for a lot of the competitors.”

Back with a bang for the Manx

The Rally Isle of Man will now provide the double points finale as it replaces the Granite City Rally. Chairman of the event John Gill remained in support of the BRC despite being left off the calendar.

“Initially we were disappointed not to be included in the original calendar but I like to think we’ve always supported new things and new ideas.

“To be the final round for the new revived and exciting BRC is an ideal end to 2015 for us.

“It’s a fantastic opportunity for both the Rally Isle of Man and the BRC to put on an event which hopefully will attract more people from around the world. We’ve done a good job attracting international competitors and we hope to continue to do so.”

BRC championship manager Iain Campbell believes the decision to miss out the Isle of Man initially was difficult, but is content with the changes to the calendar.

“One of the hardest decisions we had back in June was leaving the Isle of Man off the calendar.  However at the time the calendar was being devised it was thought that Wales Rally GB could be held in early October and the Manx date was to close to our WRC round.”

Good reason for double round change

BRC organisers have paid tribute to the two events that have been replaced in the 2016 calendar:

“The Granite City has a new organising team for 2016, so it was just a bit much for the event to step straight up to BRC level,” said Iain Campbell. “And with everything still on-going with regard to the police enquiry in Scotland, it was simply not possible for the Jim Clark team to be certain that they could get the road closure orders, so they have gone back to gravel for 2016 and we hope they’ll be back on the roads in 2017.”

If the decision to miss the Manx off the initial calendar was a difficult one, the inclusion of the Nicky Grist was quite the opposite.

“To be able to combine BTRDA and BRC on a single event run on classic Welsh stages is going to set up a great occasion and to have the opportunity to do it on gravel and asphalt and return to a ‘mini’ Welsh International of the 80s was too good to pass up.”

What the driver says

British rally hopeful Tom Cave is one of the very few drivers to have competed on both the Manx, Nicky Grist Stages and the Epynt ranges. He’s also competed on a mixed surface event for the past two years – Rally Spain – while competing in the WRC-supporting Drive DMACK Trophy. The 24-year-old is working hard to secure a budget to do the full BRC season allowing him to do the events.

On the Nicky Grist…

“The gravel stages were Wales Rally GB stages for many years, they’re renowned to be very quick stages with a very hard compact surface. The Halfway stage is really tricky and Route 60 which runs over the top of Epynt usually catches a few people out.”

“They’re very unique, smooth and narrow. Not very forgiving either, very tricky. They’re very slippery in the wet, that is another challenge. It’s a very specialised place, Epynt, with plenty of jumps and crests.”

On running a mixed surface…

“It’s nice to have a different challenge; to have mixed surface events adds in the factor of setting the car up for each day and it makes the job that little bit harder for driver and co-driver. The spectacle will be entertaining for the fans as a split surface event hasn’t run for a long time in the British Rally Championship.”

“Isle of Man has a lot of heritage and history in the British Championship. The roads out there are so unique – fun, but very fast. You have a mix of fast stages and technical stages and I think that will be a great event to finish the Championship next year and the double points will make it even better.  I’ve only done it once and I’ll be honest – it was a challenge and because it’s on an island the weather throws a spanner in the works.” 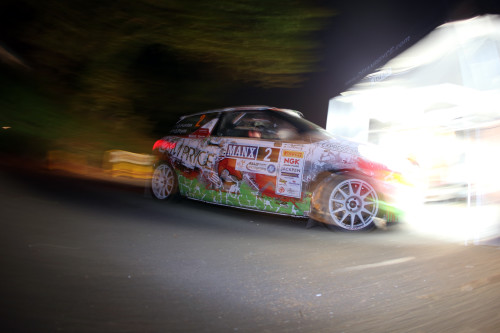