In the Junior BRC, Northern Irishman William Creighton and navigator Liam Regan put an end to their torrid luck and ended their two-year winless streak to chalk-up their first Junior BRC win since the Ulster Rally in 2017.

The Peugeot 208 R2 crew had a heart-stopping moment on stage two when a puncture nearly ended their chances. A fight back on the remainder of the six stages netted them the final £2,500 cheque from Peugeot UK and Total and the icing on the cake came for Liam Regan who was crowned the 2019 JBRC co-drivers Champion.

William Creighton said:
“We are delighted as this has been a long time coming, and I am so happy to get the win. That’s what we were going for this weekend, but to get held back with a puncture, we really thought our luck is not going to change. The fightback showed we could do it and this is for Liam [Regan] and the whole team.”

Marty Gallagher and Dean O’ Sullivan drove brilliantly in Scotland for their first time on gravel in the Ford Fiesta R2T and could arguably claim one of the drives of the weekend – pushing Creighton all the way to eventually finish second in the JBRC.

The Scottish pairing of Finlay Retson and Richard Crozier rounded out the podium spoils with the crew delighted to take their second podium of the year and put an end to their run of bad luck.

Englishman Ruairi Bell lifted the 60,000 Euro voucher from M-Sport and Pirelli – his prize for topping the Ford Fiesta R2 Trophy standings. Expertly guided by 2018 British Rally Champion co-driver Darren Garrod, the pair can now use the prize fund to put towards a campaign in the Junior World Rally Championship in 2020.

Ruairi Bell said:
“It’s a bit surreal, it’s just not sunk in. It was a tough event and in fact a tough year, with some tough competition. We had a set goal at the beginning of the season and we managed to achieve it, and those final few stages were pretty nerve-racking but it was brilliant when we finished the final stage.”

The Dunharberry stage was to be the talk of the rally in the Junior BRC.  Jordan Hone was leading the rally and was enjoying a fight with James Williams. Hone was a on a mission to secure his first win while at the same time was looking to help co-driver Keaton Williams to the JBRC co-drivers title. Sadly for the Opel crew, drama was to strike on the first run through the stage with the pair sliding out of the event. The second run through was to claim another victim. With Hone out, Williams inherited the lead but he and co-driver Tom Woodburn were sidelined after a mechanical failure on the Fiesta.

Alan Carmichael was the sole runner in the National Rally Cup and secured the 25 points in his right-hand-drive Hyundai i20 R5 with Claire Williams expertly guiding. 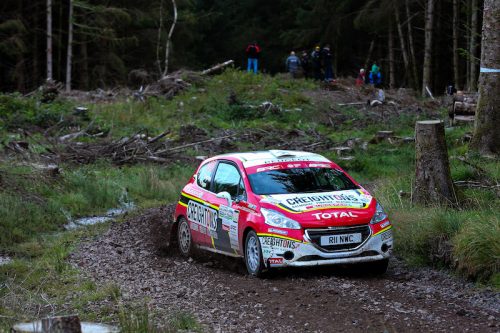