The Abergavenny-based driver had a difficult opening two rounds in the series with a variety of problems impacting upon his results. On the first event of the season in mid Wales, Cole, with Paul Morris alongside, suffered several mechanical problems with his newly acquired Ford Fiesta S2000. Issues with the dampers and a misfire restricted his progress on the snow-lined gravel stages with a roll during the opening test on the second day compounding a disappointing weekend.

The Circuit of Ireland was to be another grueling challenge with Cole struggling with road position and long road mileage. Putting the first two rounds behind him the Welshman returns to Britain’s premier rallying series eager to score a respectable finish in his older naturally aspirated machine.

“We have a fair bit of Nicky Grist Stages experience from over the years,” explained Cole. “When it was the Quinton Stages we finished second in the Hyundai Accent WRC behind Andy Burton, so we have good knowledge of the gravel on the first day.”

It is the second day that the Tarmac ace is looking forward to as he has the most experience of any BRC driver over the famous Epynt Ranges. Damian has scored countless wins on the famous ribbon of asphalt and will be hoping previous form will help him towards a solid result.

“I really enjoy driving Epynt and experience is vital on the challenging roads. We will be at a disadvantage in the S2000 cars against the R5 turbo machines. There are a lot of chicanes and point-to-point acceleration out of them is where we will lose out on time. However, over the fast stuff it will be okay as I will really hustle the machine to make up time.”

The Nicky Grist Stages will be the last event for Damian Cole for now in the striking Get Connected Ford Fiesta S2000.

“Running a business has meant I cannot commit to the BRC as much as I would have liked but the chance to do the home event and sample Epynt as part of the BRC will be special and I cannot wait to get going this weekend.” 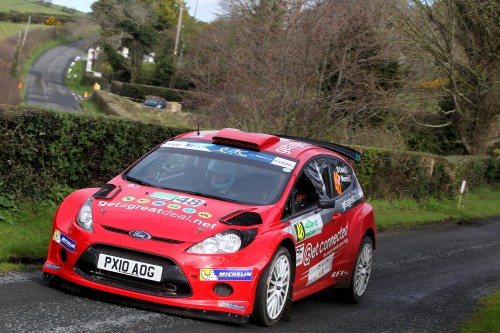