The British Rally Championship heads across the Irish Sea, as the Clonakility Park Hotel West Cork Rally (13/14 March) hosts the second round of the pulsating series.

Britain’s premier rallying series visited West Cork in the Republic of Ireland for the first-time last season. For the second year running, the BRC championship protagonists are set to do battle over two-days through the legendary Irish lanes. Fourteen speed tests will equate to 135 competitive miles, which will provide the challenge on St Patrick’s weekend. What’s more, the best from the British series will go toe-to-toe with the Irish Tarmac Championship, adding a further spectacle for rally fans lining the competitive route.

On the opening round Matt Edwards and Darren Garrod got their season off to a scintillating start with victory on home soil on the Visit Conwy Cambrian Rally in the new Ford Fiesta R5. The Pirelli-supported pairing will be eager to show the versatility of the new car, and Edwards in particular will be seeking revenge after missing out on the West Cork BRC win in 2019 by a mere 4.8 seconds.

The man who beat Edwards to the win last season was Tom Cave in his Hyundai i20 R5. The Welshman had a disappointing home round last time out, damaging a wheel and falling from the lead of the event. The pair managed to climb back up to sixth, but Cave and co-driver Dale Furniss will be desperate to bounce back and take victory in Cork to get their title tilt back on track.

The biggest news in the break between round one and two is the return of Volkswagen back into the BRC, this time with Osian Pryce and co-driver Noel O’Sullivan from Killarney at the helm of a new VW Polo GTI R5. Pryce returned to the series after two years away from the top-flight in spectacular style – taking a podium on his home event. The German machine will be an unknown quantity, but in Pryce’s hands, will be a formidable force as he vies to continue his rostrum run.

WRC star Rhys Yates was another series returnee in his Michelin-supported Ford Fiesta R5. The Englishman notched up the final podium position on the Cambrian and will be seeking more of the same on the Irish tarmac, a surface the Derbyshire ace goes particularly well on. Strengthening the M-Sport-backed drivers assault this year is James Morgan who expertly guided Tom Cave to victory last season, and Yates will be eager to draw on the Welshman’s knowledge this time round.

2019 Billy Coleman Award winner Josh McErlean from Kilrea will be tackling his first BRC event on home soil this weekend in a Hyundai i20 R5. The young Irishman has impressed many this season with Keaton Williams sat alongside, however, the pair suffered heartbreak on the first round when lying in third. The Anglo-Irish crew were forced into retirement after breaking the steering. Ireland’s latest hot property will revel in the return to Tarmac as he pushes for his first four-wheel-drive podium in the BRC.

Malaysian manufacturer Proton made a striking return to the BRC as Ollie Mellors and Ian Windress put the Iriz R5 through its paces on its BRC debut. The English partnership set some respectable times with the new car and eventually finished fourth overall in front of the sister car of James Williams and Dai Roberts. Williams enjoys the sealed-surface and could well spring a surprise in the new car. The Proton ranks will swell to three cars for round two, with multiple British Ladies Champion Nabila Tejpar stepping up into the top class. Tejpar will be joined by the vastly experienced Portuguese co-driver Hugo Magalhaes as the duo push for points on their BRC R5 debut.

Cathan McCourt from Omagh and 2010 BRC co-drivers Champion Barry McNulty from Enniskillen will be vying for their first BRC finish of the season. Another pair who were dogged by retirement on the opening round will look to make amends on the sealed-surface lanes around Clonakility. The Irish crew sealed sixth on the opening round of the Irish Tarmac Championship in Galway earlier this year and will hoping that form can continue this weekend in their Ford Fiesta R5.

Junior BRC battle has been ignited ahead of West Cork

The Junior British Rally Championship in 2020 is open to drivers aged 26 and under in identical Ford Fiesta R2Ts from M-Sport – will all front-wheel-drive machines on Pirelli tyres – creating a highly-competitive level-laying field.

Quickest out of the blocks on the season curtain-raiser was William Creighton (Lisburn) and Liam Regan (Belfast). The pair made a closed season switch from a Peugeot 208 R2 to the turbo-charged Fiesta. Getting to grips slowly on the opening few stages, the championship leaders got into their stride to eventually seal the win by 22.5 seconds. Creighton is the man with the target on his back as a whole host of young stars will be looking to topple the early season pace setter.

David Kelly and Darragh Kelly from Donegal surprised many with their early pace on the Cambrian as they grabbed the final podium spot by 0.7 seconds on the final stage. David will be a dark horse for success this weekend, as will Brian Brady (Meath) and Eamon Creedon (Cork). The Irish pairing suffered a sizeable off on the first round of the season and unable to continue, the crew had to take an early bath. Rest assured they will come back fighting as they gun for a podium to open their points account.

Eamonn Kelly (Dublin), son of 2015 Irish Tarmac Champion Donagh Kelly, will continue the successful Irish rallying dynasty in the BRC this season with Conor Mohan (Monaghan) in the navigator seat. Having missed the opening round, the crew will be keen to spring a surprise and unsettle the JBRC establishment in West Cork.

The British contingent is equally as strong as they travel across the Irish Sea in search of glory. Finlay Retson and Rhys Stoneman opened their account with a fine second on the first test of 2020 and will be battling for the same in Ireland. Eddie Lewis and Dom Adams will have the bit between their teeth after missing out on a podium on the Cambrian. The British team will be seeking revenge in the Irish crews’ backyard this weekend. Rupert Flynn and Richard Crozier finished their first gravel event together with a fine fifth place in Wales and will seeking to climb the leader board on the first asphalt challenge of the year.

Alan Carmichael and Claire Williams are the lone competitors in the Motorsport UK National Rally Championship this weekend in their right-hand-drive Ford Fiesta R5. Northern Ireland driver Carmichael is gathering speed with every stage and will look to trade times with the other R5 frontrunners across the two days.

The Clonakility Park Hotel West Cork Rally (13/14 March) will commence with a Ceremonial Start on the Friday evening in Connolly Street, Clonakilty, with 14 stages and 135 miles awaiting the intrepid crews. The winners will be welcomed, and champagne sprayed at the Ceremonial Finish in the heart of Clonakilty from 16:45 on Sunday afternoon.

Follow all of the BRC across social media and www.britishrallychampionship.co.uk Don’t forget to WhatsApp us with your rallying news, images and videos. The number is +44 (0) 7752 402408 and the best few will win some BRC prizes. 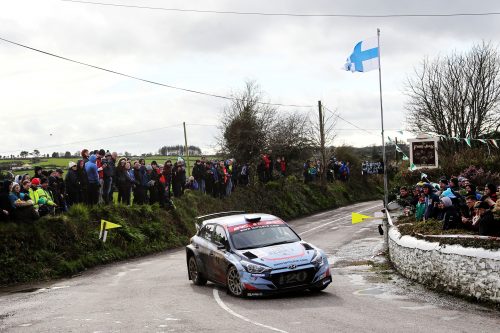