After three pulsating rounds, the British Rally Championship heads into Europe for round four of the series – the Renties Ypres Rally (27-29 June). The Belgian event is one of the most iconic rallies in the world and the legendary asphalt lanes in the Flanders region are some of the most challenging stages in Britain’s premier rally series this year.
The BRC summer spectacular will start on Friday afternoon in the heart of Ypres, with the crews being waved off under the shadow of the impressive Cloth Hall in the Grote Markt square. The BRC crews will then thread their way through two action-filled days comprising of 160 competitive miles in daylight and atmospheric night-time conditions.
Not only will the British Championship crews battle each other for championship points, they will also go toe-to-toe with some of the best in the world including Craig Breen, Kevin Abbring and former world championship star Freddy Loix who is an 11-time Ypres Rally winner.

The man in form coming into round four is Welshman Tom Cave in his Michelin-shod Hyundai i20 R5. After a retirement on his home round – the Cambrian Rally, Cave has taken back-to-back wins in Cork and Cumbria to lead the standings before the Ypres Rally. Cave has two previous Belgian visits under his belt, but retirements have denied him a lucrative finish. Hopefully his third visit will be third time lucky and with Dale Bowen in the co-driver’s seat, the Welsh pairing will be battling for the BRC win and an outright top five.

Defending Champion Matt Edwards sits second in the standings. After clinching the opening round on home soil, the Pirelli-backed driver will be keen to repeat his Ypres performance of 12 months ago. The M-Sport star snatched the 25 points from Keith Cronin in the final stages of the event – sealing his first BRC Tarmac win in the process. Edwards and co-driver Patrick Walsh were forced to retire last time out on the Pirelli Rally – provisionally denting their title hopes. One thing is for sure the Welsh duo never give-up and will be taking the fight to Cave this weekend as Matt hopes to regain the championship lead.

Marty McCormack is adored by the Belgian rally fans after his stunning performance in 2015 when he pushed his S2000 Skoda Fabia into an impressive eighth overall against the finest in the European Rally Championship. Now in the R5 derivative of the Skoda Fabia, Ypres has not been too kind to the Irishman with two retirements in as many years. Now with navigator Barney Mitchell alongside, the greatest showmen are eager to back-up their Cambrian Rally podium. Can they go two better and claim that illusive first BRC? Ypres could well be the location.

Rhys Yates made everyone sit up and take notice last year when the Englishman dominated Rally van Wervik – a traditional warm-up event for Ypres. However, all didn’t go to plan on the Ypres Rally itself when a few uncharacteristic offs and an unwell co-driver meant the Skoda Fabia R5 driver had to take an early bath. Yates and co-driver James Morgan are dovetailing their BRC commitments with a busy schedule in the FIA World Rally Championship this year and like McCormack, Yates would dearly love to chalk-up his first BRC win.

Asphalt ace Alex Laffey and co-driver Stuart Loudon have had a trying start to their 2019 BRC campaign in the second of the M-Sport run Ford Fiesta’s. Laffey visited the BRC podium on Wales Rally GB last year and will be throwing everything he can at this event to stand on the rostrum once again and spray the champagne in the centre of Ypres at the finish.

Fellow Fiesta R5 driver Enda McCormack is finding his feet in the BRC this season. The newcomer to the series claimed his first outright points on the Pirelli Rally last time out. As the event is known as a battle of attrition, if Enda and navigator Tommy Doyle can steer clear of trouble, a good result could well be on the cards for Irish pairing.

As well as chasing a BRC win and overall podium, BRC stars will be vying for the Tony Pond Award – presented to the first BRC crew across the finish line. There will also be a Junior Tony Pond Award – adding another incentive for rallying’s emerging talent to go for glory in the Flanders region.

The Junior BRC is home to an impressive pack of young talent, who will all be eager to put in a big performance in their front-wheel-drive cars in front of thousands of spectators in Ypres.
Josh McErlean and Keaton Williams have won the last two events on the bounce in their Peugeot 208 R2 – scoping £5,000 from Peugeot UK and Total in the process. The driver from Northern Ireland has shown brilliant speed previously, but with a mature approach in 2019, the championship leader is looking untouchable this season as he sits pretty at the top of the standings with an 11-point lead. Ypres was the scene of a breakthrough podium last year and like Cave in the main category, McErlean will be gunning for a hattrick – a feat last achieved in the JBRC by Rob Duggan in 2016.

William Creighton and Liam Regan are the most consistent crew in the JBRC and can never be discounted from the podium. With three in the bag already, the 208 R2 crew will be eager to close the gap to McErlean at the top of the table and end their win drought, as the Irish crew last topped the podium on the Ulster Rally in 2017.
The Peugeot 208 R2 is the car to have this season as James Wilson showed on the opening round when he broke into the JBRC winners circle on the Cambrian Rally. Disappointment followed on the next two rounds for the hungry Irishman but along with 2014 BRC co-drivers champion Arthur Kierans, the pair will be wanting to show their 2019 turn of speed with a win on the Tarmac of Ypres.

Leading the charge in the Ford Fiesta Trophy is Finlay Retson and Richard Crozier. The Scottish outfit finally turned raw speed into a podium finishing product to take third on the Pirelli Rally. With their third place, they took maximum points towards the Fiesta prize – a 60,000-euro fund towards a seat in the Junior WRC in 2020 courtesy of M-Sport and Pirelli.

Fellow Ford Fiesta protagonists Ruairi Bell and Bart Lang will both be wanting a slice of the action on the iconic two-day event to close the gap to Retson. As will James Williams who makes a welcome return to the series in a brand-new Ford Fiesta R2T. Williams was the quickest front-wheel-drive driver on the event last year on his way to his first win. The Welshman has been frustrated on the side-lines and a strong Ypres Rally could bring him into the Ford Fiesta Trophy mix with half a season still to run.

John Morrison and Peter Carstairs also make a welcome return to BRC action, this time in the National Rally Cup. The experienced pair love the trip to Ypres and will be hoping for a clean run in their Kumho-shod Mitsubishi as they aim for maximum points to put their title tilt back on course.

Keep up to date with all things BRC by visiting www.britishrallychampionship.co.uk and the Renties Ypres Rally, www.ypresrally.com/en/ 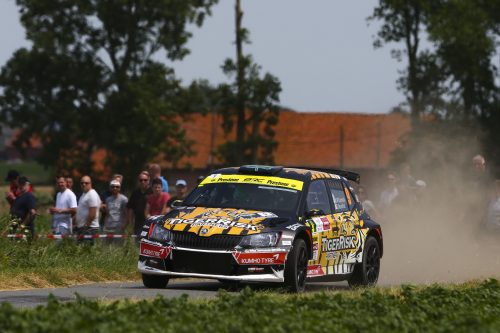