The Pirelli International is one of the most eagerly anticipated events on the calendar due to the characteristics of the stages; loose gravel through one of the largest man-made forests in Europe always has crews at fever pitch and flat-out at over 100mph.

The event got underway at the Pirelli Factory in Carlisle, where fans were thrilled by motorbike and car demonstrations as well as the Prestone simulator. A popular introduction on the Border Counties Rally means the simulator experience is sure to become a popular fixture at each BRC round with prizes on offer for the fastest person on the bespoke BRC stage.

In the Production Cup, Spencer Wilkinson and Glyn Thomas took the honours in their Subaru despite an eventful afternoon which included ratchet-strapping the rear wheel to the car after it came loose.

In the National Rally Cup, John Morrison and Peter Carstairs continue to develop in a new Mitsubishi Lancer E9. Despite struggling with hairpins, they took the win ahead of Max Utting on his BRC debut in a Ford Fiest ST. Mike Ainsworth read the notes.

In the Cadet Class, Josh Cornwell/Richrd Bliss survived a heavy challenge from fellow Ford Fiesta R2 duo Fergus Barlow and Max Freeman, before the latter went off the road on Sunday morning. 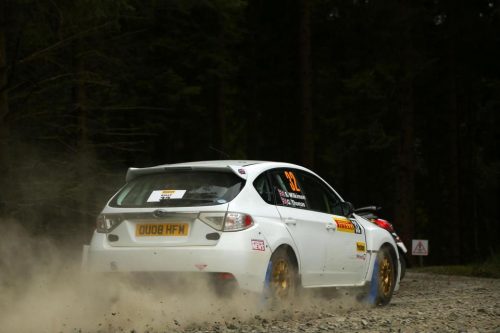