Christmas comes early thanks to the BRC

Looking for that perfect stocking filler for the rally fan in your life this Christmas? Look no further than the official 2016 MSA British Rally Championship DVD, which is on sale now.

Britain’s premier rallying series burst back onto the scene in 2016, with seven fast-paced rounds travelling the length and breath the British Isles. From the snow-lined Mid Wales Stages through to the climactic curtain-call on Rally Isle Man, cameras closely followed the picturesque action with stage-side and stunning aerial views. Dramatic high-speed on-board footage is carefully woven into the story along with heat-of-the-moment interviews from Colin Clark – all of which helps to build the characters and personalities of the BRC crews.

The DVD not only charts the title success of BRC Champions Elfyn Evans and Craig Parry but also the close-fought battles throughout the BRC1 category. Other star names including Fredrik Ahlin, David Bogie, Tom Cave, Keith Cronin and Max Vatanen went head-to-head in four different models of R5 cars from Citroen, Ford, Peugeot and Skoda, with S2000 weapons from Ford, Proton and Skoda similarly in the mix throughout the year. Away from the top flight, a quality array of Junior drivers scrapped tooth-and-nail for the DMACK Junior BRC title while supporting classes are also featured in the four-hour season review.

“With Christmas approaching and the long winter nights upon us, what better way to relive the return of the BRC than the comprehensive season review,” said BRC Championship Manager Iain Campbell. “To have Hayfisher Productions and Duke Marketing produce the BRC Championship review and have it on sale next to F1, WRC and BTCC DVDs is a massive coup for us as it helps showcase the BRC brand to fans further afield. I look forward to receiving my own copy and sitting down to watch it as we prepare for the 2017 season.” 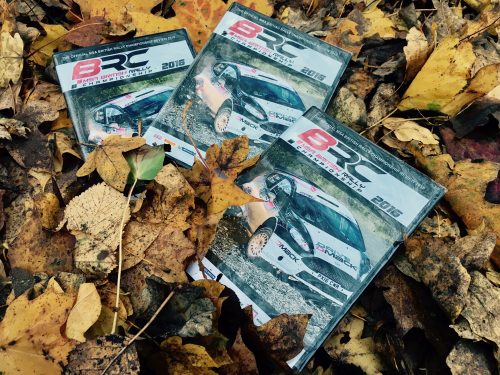