Centre Stage – Behind the scenes with the BRC

Motorsport UK took over the running of the British Rally Championship in 2015, with the new-look season launching in 2016 at the Mid Wales Stages and taking in a whistle-stop tour of the British Isles, culminating on Rally Isle of Man. Ben Buesnel, the championship’s Media Manager and Motorsport UK Communications Officer, continues: “The BRC is a British motorsport institution and over the 61 years it has provided many great rallying moments.

From the early pioneering days to the modern-day stars, people have dreamed of becoming British Rally Champion and for some, just to take part in the series is enough. The BRC has always been the proving ground for cars and young talent. The likes of Colin McRae, Richard Burns and Ari Vatanen were all BRC champions before becoming world champions.

“The mindset of the series is to help drivers and co-drivers develop inside and outside of the car. BTRDA, Scottish and Welsh Championship offer fantastic events but the mileage is around 40 miles, so the BRC provides those crews looking to tick off longer bucket list events or prepare themselves for the European or World series. Crews learn about fitness, event preparation, media skills, how to undertake a recce and note taking – all vital tools so it isn’t a culture shock, if and when they move up the rallying ladder. “I have worked with Motorsport UK for the last six or so years working on Wales Rally GB and the British Rally Championship for an external agency and when the opportunity arose to come in house, I jumped at the chance to work for the governing body.

“I work very closely with Championship Manager Iain Campbell (he is top of my most frequent dialled numbers!) and together we shape and run the British Rally Championship. We couldn’t do it alone as our numbers swell on event with Partnership Manager Alun Pritchard and Chief Scrutineer Stuart Cant joining the fold. I also couldn’t do without my media team consisting of Matt Cotton, Bex Hinton, Jakob Ebrey Photography and Adam Smith and Seb Scott who all add some magic to the line-up.

“We work with six events, several preparation teams, 40 competitors and hundreds and hundreds of passionate volunteers. Without them all we couldn’t make rallying the way it is. All of them are professionals in their own way and, by all coming together, deliver great events providing spectacular action. Who can forget the 2017 BRC Showdown where the championship was won by one tenth of a second on Rally Isle of Man! “This year we have a €60,000 prize fund from M-Sport and Pirelli which will help our Junior Champion step-up into the Junior WRC and we have a Hyundai i20 R5 prize drive for one of drivers on Wales Rally GB. It’s not just drivers, the BRC this year welcomes a brand-new car in the form of the Proton Iriz R5. The manufacturer could have chosen any series to develop the car, but they chose the BRC because of its high level of competition, professionalism and range of events.

“Rallying in previous decades was very popular and attracted almost prime time coverage on Grandstand, Top Gear and the like. For many people they are disappointed we don’t have that level of coverage anymore, but sadly it is the times we live in, it doesn’t fit with the bitesize, popcorn style of television broadcasters seek these days. So, we have to be clever with our approach. We work closely with regional and online outlets to help showcase the sport to a wide variety of audiences, and with our new video team, we will look to capitalise on these relationships and push to new outlets. “This year the series will go to the Goodwood Festival of Speed which will grow the fanbase and take it to another new audience. The BRC over the 62 years has peaks and troughs – just like any sport – but it still provides an important tool for British motorsport.

“It is an inspirational series, drivers and co-drivers have passed through the BRC ranks and onto the World Rally Championship, with many coming from Britain’s premier rallying series. It is also nice to see fans on events especially the younger generation. Seeing kids getting autographs from Matt Edwards or Rhys Yates and the like is great to see as they are the future (whether drivers, co-drivers, volunteers or marshals) and we need the series to help inspire the next generation.” 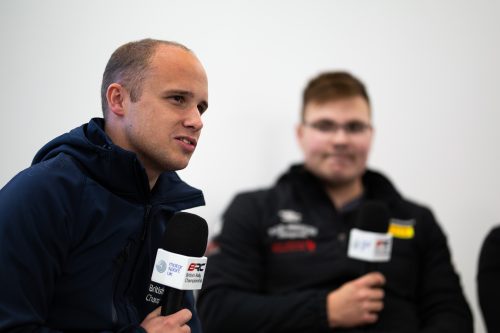