Leading British rally driver Tom Cave from Aberdyfi, is delighted to confirm that he will take part in this Saturday’s (10th July) Nicky Grist Stages Rally, round two of the 2021 British Rally Championship. The Builth Wells-based event will be the first competitive outing for Tom since the Cambrian Rally in February 2020 and understandably, he is looking forward to being back behind the wheel again:

“Having recently secured the backing from a collective of Welsh businesses and other supporting partners, the package to compete in this weekend’s Nicky Grist stages and kick start our season has literally come together in the past few days. I’m therefore extremely grateful to Trailhead Fine Foods Get Jerky, Pre-Eminent Solutions, Go Fetch, Atech Racing and Pirelli Motorsport for their invaluable support.”

For the first time since the Wales Rally GB in 2017 – when he finished an impressive third in the WRC2 category – Tom will be driving a Ford Fiesta Rally2 prepared and run by Dom Buckley RSC. Returning to the co-driver’s seat will be Dales Furniss from Llanfylin who accompanied Tom for last year’s Cambrian Rally – the only event the pair contested in 2020 before lockdown intervened.

Previous to that, Tom and Dale recorded their best ever World Rally Championship result by finishing 11th overall on the 2019 Wales Rally GB and in doing so, secured third place in the WRC2 class as well as winning awards for being the first independent entry and top Welsh crew.

“After what feels like a long 16 months, I hope I’m not going to be too match-rusty. We have some testing lined up this week, so the plan is to be on the pace when we set off on Saturday. It’s going to be great competing again, especially over the stages this rally uses as they’re some of my favourites. I really can’t wait to get started!”

A top-quality entry sees Tom and Dale seeded at #4 in a packed field of 150 cars. Indeed, such was the popularity of the event, orgainisers reported that entries sold out in 15 minutes!

The rally features a loop of four stages in the morning that is repeated in the afternoon, the combination of all eight stages providing a competitive distance of 44 miles. Whilst an event that has always attracted large numbers of spectators, at the request of the Military of Defence that owns much of the land used by the rally, this year will see the event take place behind closed doors. 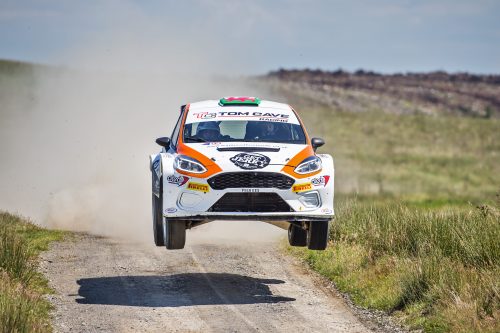