Tom Cave heads to the fourth round of the Prestone MSA British Rally Championship, the Ypres Rally in fine fettle. Despite this, the Welshman driving the new Hyundai i20 has suffered reliability woes leaving the young-gun 33 points off the summit of the Britain’s premier rallying series. With five more points-scoring opportunities on offer, his season, though, is far from over.

On the opening round, Cave, along with co-driver James Morgan, got off to a flying start, fighting for the lead before eventually netting second overall on the Border Counties Rally in a Dom Buckley prepared Ford Fiesta R5. Playing his Joker, the Welshman was in the hunt with his favourite events yet to come.

On the eve of the opening round, news broke of an exciting deal between Hyundai Motorsport and Tom Cave, who were set to work together and bring the rapid i20 R5 to the BRC for the first time on the Pirelli International Rally.

Tom was a man who was disappointed with his early pace last season but as 2016 unfolded, Cave became a strong proposition on all surfaces. He quickly established himself as the closest challenger to eventual champion Elfyn Evans and comfortably took the runners-up spot at the season curtain-call on the Isle of Man – fending off four other drivers in the finale.

A year on, and the Welshman is a different driver and has found himself at one with the Hyundai, a combination which looks frighteningly powerful when firing on all cylinders.

On the Pirelli, the first handful of miles for the i20 on English soil was a roaring success – two stage wins and a seven and a half second advantage after the opening two stages. A suspension failure put the 2016 runner-up out of the event before history repeated itself on the Scottish Rally. Two blistering stage times was followed by another mechanical failure, this time with a wheel coming free of the Hyundai.

We spoke to Tom about his season to date and getting to grips with his new mount.

“It was a challenge at the start of the year as I had not been in a rally car for so long and I went into the first round in the Fiesta wanting to collect points which we did and had a great fight with Fredrik,” explained Cave.

“We knew the Hyundai would be quick after the tests we did and it was pleasing to see the pace from myself and the car and we let the stage times do the talking.”

Cave has proven himself to be a class act in the Korean machine as every stage he has driven in the Hyundai he has won – proving that the times certainly do the talking.

“It was disappointing to retire from the Pirelli and Scottish but we won every stage and we can be happy with that. The i20 feels good and I thought it would suit my driving style which has always been neat and tidy – I think the car gets the best out of me and vice versa.

“There is more to come with a great deal of potential in the i20. I think people fear our pace coming into events because when it clicks with James, the car and I, we are a difficult team to beat.”

Tom last drove on asphalt on Rally Isle of Man last September, but is not letting his recent lack of sealed-surface mileage get in the way.

“I really enjoy the Belgian roads as they are completely different to what we have in the rest of the calendar. The roads are so smooth and don’t have the big crests like on the Manx or Ulster. I have a little bit of experience of the event with the Proton team back in 2010 and look forward to showing the pace of the i20 on Tarmac. I want to get my head down and do my own thing. The BRC win is the target and a top five on the event would be an added bonus.”

Tom Cave and co-driver James Morgan will be back in action later this month on the Ypres Rally (21-24 June). 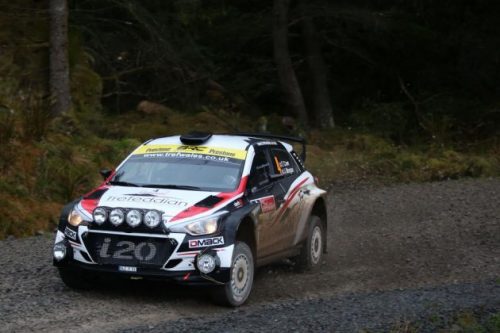