After setting the pace on SS1 and SS2 on the Pirelli International Rally, Tom Cave and James Morgan are hoping that speed continues as they confirm they will start the RSAC Scottish Rally in the New Generation Hyundai i20 R5.

“Following our performance on the Pirelli, I’m delighted that we now have another chance of showing what we can do in the Hyundai”, said Tom. “It was clear from the first two stages this weekend that the car has the potential to win, so I hope we will be able to follow on from where we left off when we get to Scotland in a few weeks time.”

Cave, Morgan and the i20 R5 set the fastest time on the first stage by 0.1 second ahead of Fredrik Ählin/Torstein Eriksen. It was a perfect start and, feeling confident with the way the car was performing, they underlined their stage one performance by winning stage two with a margin of 7.4 seconds.

Heading into SS3 with confidence high and with every intention of increasing the advantage the first eight kms of the stage went exceptionally well, but then, Cave felt a change at the rear of the car.

Aware that something was wrong, he was forced to bring the car to a halt on the stage. Although there was little damage the problem was serious enough to put them out for the day. Once back at service the team decided that, as the opportunity for achieving a top result was over, and with the same car due to compete at another rally next weekend, they would not restart on day 2.

Now there is a second chance to show what the team and the car can do in Scotland in just over two weeks time. 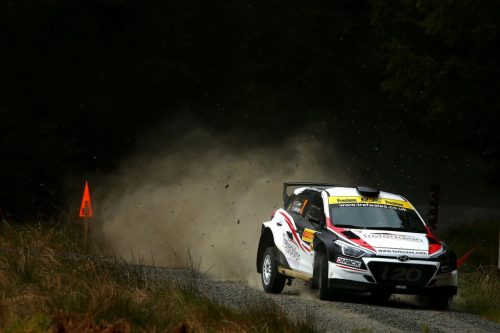