Welshman Tom Cave took his first British Rally Championship win in a four-wheel-drive car on the West Cork Rally last weekend (16/17 March). Along with co-driver James Morgan, the pair won the event by a mere 4.8 seconds in their Hyundai i20 R5 from reigning champion Matt Edwards (Ford Fiesta R5) in second, while defending Irish Tarmac champion Josh Moffett (Ford Fiesta R5) rounded out the podium. Cave’s win was the first BRC win for the Korean manufacturer Hyundai since David Higgins in 2004.

The Clonakilty Park Hotel West Cork Rally formed the second round of the BRC for the very first time and the event provided two-days and over 200km of exciting rallying action. On some of the most iconic roads in Irish rallying, the weather also provided a formidable challenge as a wet and slippery first day was coupled with a flat-out blast on bone-dry asphalt on the second.

FIA World Rally Championship regulars Craig Breen and Paul Nagle took a comfortable overall win, but it was the fight in Britain’s premier rallying series that kept everyone on the edge of their seats right until the end.

Defending Irish Tarmac Champion Josh Moffett with Keith Moriarty on the notes were quickest out the blocks – making their aspirations very clear and over the course of the opening five stages pulled out a 14.4 second lead. However, driveshaft woes forced them into two-wheel-drive on stage six – dropping them down to third and out of the leading battle.

Desi Henry was another driver keen to make his mark this weekend but unfortunately, he and navigator Liam Moynihan crashed out of second on the first loop of stages in their Skoda Fabia R5, thankfully both were unhurt.

Up stepped 2018 British Rally Champion and series leader Matt Edwards and co-driver Patrick Walsh in their Pirelli-supported Ford Fiesta R5. The Welsh crew were building the pace as the opening day unfolded and went into the overnight halt with a slender lead over Tom Cave.

Cave had a heart-wrenching time on the opening round in Wales when the 27-year-old suffered a double-puncture, denying him a second-place finish. On the Tarmac of round two, the Michelin-supported driver put his Cambrian nightmare behind him as he set about his first R5 win in the BRC.

It was set-up nicely going into the final day as the two Welsh crews went head-to-head for the BRC win. Cave woke up in an inspired mood to go eight seconds quicker than Edwards and leap-frogged the M-Sport star in the process. The tussle for victory was to be a seesaw affair as the duo traded times and positions all afternoon with only 4.9 seconds going into the final stage.

Despite Edwards’ best effort, Cave was to be too strong this weekend and he and James Morgan won the BRC section of the event by 4.8 seconds to take their first BRC win together. After coming so close to an event win in recent times, Tom was elated at the finish.

“The feeling of finally winning in the BRC again is a brilliant to be honest. It was a difficult first day against the elements, but we pushed on hard on the second day to get past Matt [Edwards]. We gave it everything and we have been rewarded with first place BRC, so James and I are both very, very happy.

“After the pace on day one I felt there was more to come and we had a good feeling on the first stage on the second day and we took a lot of time out of Matt. Once that happened, I thought, lets keep pushing and we have been rewarded. I would like to thank everyone behind me for making this happen.”

As for the title, this gets his title back in the right direction.

“It’s heading the best way possible now and round one is way behind me and we always look forward. We are back in the mix and now it’s important to finish the Pirelli Rally which is up next and keep moving forward to close the gap to Matt at the top of the points standings.”

Matt did all he could, but a strong second place stretches his championship lead going into the Pirelli International Rally – the event he won last year. Josh Moffett’s rhythm was effected after his driveshaft issues, but did enough to round out the final rostrum position.

Elsewhere, Marty McCormack and Barney Mitchell couldn’t quite repeat their podium secured on the first round in their Skoda Fabia R5, but they can be happy with a fine fourth, while Jonny Greer and Kirsty Riddick (Ford Fiesta R5) chalked-up their first finish of the season as they rounded out the top-five.

Irishman Josh McErlean and co-driver Keaton Williams claimed their first Junior BRC win in their Peugeot 208 R2 and in the process scooped a £2,500 cheque from Peugeot UK and Total.

McErlean has come close to snatching the top-spot on several occasions but the bridesmaid became the bride as he became the second new winner this season to spray the champagne on the top-step. This result has elevated him to joint leader in the points standings.

Marty Gallagher and Dean O’Sullivan were the initial leaders until the pair crashed out of the event – luckily both were unscathed.

Jordan Hone and Aileen Kelly (Opel ADAM R2) inherited the lead and were the overnight pacesetters – creating a tantalising battle royale with McErlean going into the final day. McErlean was a man on a mission as he grabbed the lead and never looked back – powering his way to maximum points in Clonakilty. Stage 13 was to be unlucky for Hone, as his fine run was to sadly come to an end as Opel ADAM R2 slid off the road and out of the event.

Vauxhall ADAM R2 driver James Williams and co-driver Tom Woodburn put the round one retirement behind them to finish a fine second while William Creighton and Liam Regan continue to be a regular feature on the JBRC podium as they notched up third.

James Wilson and Arthur Kierans came to West Cork as championship leaders and leave the second round as joint points leaders with McErlean after a spirited drive to fourth despite misfire and accident woes. After setting some impressive stage times in the brand-new Ford Fiesta R2T, Ruairi Bell and Darren Garrod rounded out the top five and snatched maximum points for the Ford Fiesta Trophy.

Alan Carmichael and Claire Williams in their right-hand-drive Hyundai i20 R5 put on a great show all weekend and leave the West Cork Rally with maximum points in the National Rally Cup. 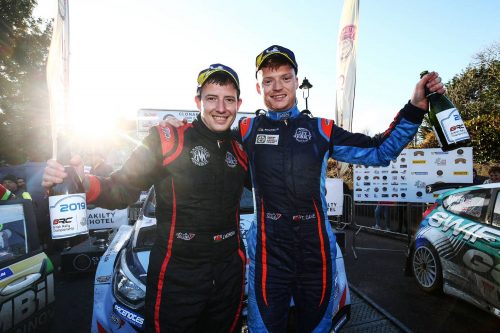