Cave brings Hyundai marque back to the BRC

After announcing his comeback to the BRC last week, it has today (8 March) been confirmed that Tom Cave will drive an i20 R5 on the forthcoming Pirelli International Rally, round two of the Prestone MSA British Rally Championship.

The event, that takes place on 29/30 April, marks the car’s first ever appearance in Britain’s premier rallying series.

The New Generation i20 R5 is to be supplied and run by an experienced private Hyundai Motorsport customer team, who compete regularly in national championships across Europe. Tom is scheduled to carry out a substantial test in the car ahead of the Kielder Forest-based event.

“It’s great to have the opportunity to debut this car in a round of the British Rally Championship”, said Tom. “The Hyundai has previously been seen on rounds of the WRC – including Wales Rally GB – and other overseas events, so I am delighted to be the first drive it in the BRC.

“Having been developed throughout the course of 2016, the i20 R5 has already proved it can be competitive and, because it’s the first time for the car in the BRC, I’m expecting it to attract a lot of attention. I’m therefore intending to do the best job I can for everyone involved and to show the car in the best way possible.”

It was announced last week that Tom will contest the first round of the British Rally Championship – this month’s Brick & Steel Border Counties Rally – in a Dom Buckley Motorsport prepared Ford Fiesta R5. The drive in the Hyundai is currently just for one event and therefore the 25 year-old Welshman is hoping that a good result and the exposure surrounding it will give momentum to the rest of his season.

“Having finished second last year, the aim is to be able to continue in the BRC for the whole season, as I believe I have an opportunity to fight for the title. I therefore hope that with a good result, the drive in the i20 will lead on to other things – hopefully in another Hyundai!”

Tom will be partnered this season by his co-driver from 2016, James Morgan and said: “I’m delighted James will be joining me again. Whilst the team and car will change this season, it’s great that with James the consistency will be maintained inside the car.” 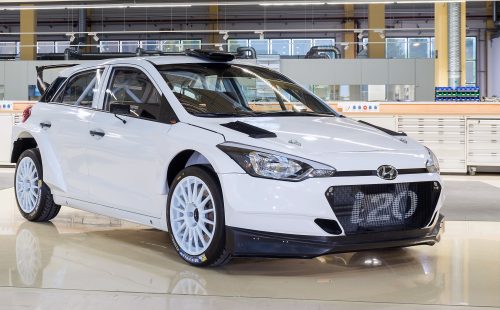