Welsh Rally driver Tom Cave is pleased to confirm that he will compete for honours in this year’s Motorsport UK British Rally Championship. He will contest all of the season’s six rounds behind the wheel of a Hyundai i20 R5, supplied and prepared by the PCRS team that ran a similar car for Tom on the Wales Rally GB in October.

The 2019 British Rally Championship season kicks off on Saturday 16th February with the Visit Conwy Cambrian Rally, when Tom will be joined by fellow Welshman Dale Bowen as co-driver.

“We’ve been working hard behind the scenes to make this year happen, so I’m delighted that everything has come together just in time for the first round and I really have to thank everyone who is supporting me this season.

“Having been runner up in 2012 and 2016 and third in 2013, the British Championship is something I would really like to have on my CV, so it’s great to have the opportunity to challenge for the title this year.”

Support for the season comes from Trailhead Fine Foods, who teamed up Tom for last year’s Rally GB to launch their new Get Jerky range of snacks. Also continuing their backing from 2018 is Chester-based HN Nuttall Foodservice, Atech Racing and Walero.  Adding their names to the list of supporting partners are Michelin Motorsport and Hyundai Motorsport Customer Racing.

“Philip Case Rally Sport are supplying and running the car for the whole season. We worked very well together on Rally GB, so it makes complete sense to continue the association.

“I’m delighted to be back in a Hyundai and, after my previous outings in the i20, I feel very much at home in the car. With the upgrades that have been made to the car over the two years since I first drove it on the Pirelli Rally in 2017, I think we can really push for the title this year. I can’t wait to get started, especially as the first round is my home event!”

The Visit Conwy Cambrian Rally gets underway at 8.00am from Mostyn Street in Llandudno. Tom and Dale will be the fourth British Championship crew to leave the start before heading into a series of North Wales forests that are synonymous with the sport of rallying.

The route, which comprises 66 competitive miles, features three stages in the morning followed by a service halt in Llandudno. A further five stages take place in the afternoon followed by another service halt and, for BRC competitors, an additional two nighttime stages before the event finishes where it began later that evening. 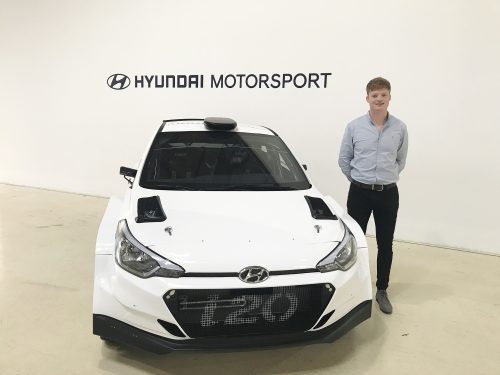