Northern Irishman Alan Carmichael is the first driver to register for the 2019 British Rally Championship.

The man from Ballymena is the first driver to signal his intent in 2019 and will drive an striking Hyundai i20 R5 on all rounds this season as he hopes to mix it with the BRC regulars. Let’s hear from a new face to Britain’s premier rallying series.

“I did the Evo Challenge ten years ago so was up against guys like Mark Higgins and Gwyndaf Evans and that was really enjoyable,” enthused Carmichael. “Since then, I have taken on BRC guys in Ireland whilst in a WRC car. I have always looked at the BRC and wanted to give it crack, and this year the calendar really suited me and the opportunity to drive an R5 was too good to miss.”

Carmichael has driven an exotic array of World Rally Cars in his rallying career, but for the first time last season switched to the successful R5 format and has given his right-hand-drive i20 a thorough shakedown ahead of the new season.

“On gravel, we did the Grizedale Stages and got some mileage but had too many problems for a proper go at it. We then did the Turkey Run Rally at the end of last year. To be only three seconds behind the MINI WRC car and put [Desi] Henry behind us was a pleasing result. We would like to enjoy some more battles like that in the BRC!”

So, for a man with so much experience with big WRC and Group N machinery, how does he find the nimble little R5 Hyundai in comparison?

“The only real difference is the longer straights on stages – the WRC car has the legs but I tell you what, the R5 is not far off! You just have to rev it more and be very neat and tidy and really plan your approach and exit out of corners. I am still getting used to it and think it will take me a bit of time, but I hope to be more competitive in the second half of the year.”

The new-look calendar for 2019 was a major draw for Carmichael, as he explain…

“I have done most of the rallies before, it’s just the Cambrian and Ypres I have yet to tick off. Ulster will be good as that’s my home event and I have been lucky to the win the National Rally in the past, so hope to have a good showing there. I probably go better on Tarmac but actually enjoy driving on gravel more, sliding the car around and extracting the most when struggling for grip. There are some great stages coming up this year to drive the car in anger.”

New year, new challenge for Alan. What is he hoping for in 2019?

“My dream would be to get a podium. Obviously one on every round would be great, but realistically even just one would make me very happy. Most importantly, I simply just want to enjoy my driving. The Hyundai is very exciting to drive and I am just itching to get to Wales now. The only problem I face this season is that I am doing the London Marathon the day after the Pirelli, so am just seeing if I can squeeze both of them in. We will see!”

The British Rally Championship will get underway on 16 February as the BRC descends upon Wales for the Visit Conwy Cambrian Rally.

Competitors wishing to enter the 2019 series should act fast as entries for the opening round are filling up. Registrations for the series are also now open. 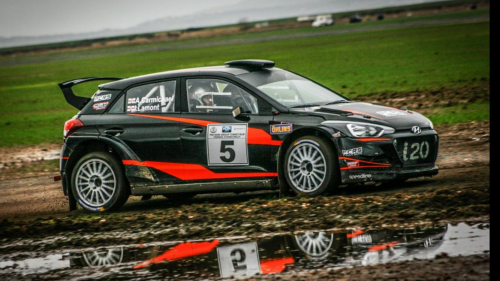