Northern Irishman Alan Carmichael is the first driver to throw his hat into the ring for the newly created Motorsport UK National Rally Championship. Carmichael will use a right-hand-drive Ford Fiesta R5 in both Britain’s premier rally series and the Northern Ireland Championship.

“This really is a big box ticker for me. I wanted to do a National championship but still be involved in the BRC. The series is well run and there is a buzz and great craic around it. It’s the events and people competing and involved in it that make it. Last year I had no luck what so ever, so from a personal point of view I want to come back and finish some rallies! From the Cambrian to Galloway Hills it just didn’t go right for me, so I am back in 2020 to give it my all and it’s great to be a part of the BRC.”

Alan showed flashes of brilliance in his first foray in a R5-specifaction car last season and is still ruing what might have been in the BRC last year.

“It just didn’t start on the right foot. The car kept cutting out from stage one. It was such a disappointment as we couldn’t see how we compared against everyone else. We could have won the National section on the Ulster and been on the BRC podium outright. We have to draw a line under that and now we can have a good go at the National title.”

Carmichael is raring to go and is pleased to have his plans cemented early in the season.

“I have a business to run so I am not in the car between events so the change of car wont be a massive problem. My car from last year has been turned back into a left-hand-drive model for the Motorsport Ireland programme so this right-hand-drive Fiesta R5 became available and looks a very quick option. Claire [Williams] will be back for the BRC and we got on well last year and that will help massively and I will have Ivor for the Northern Ireland Championship. I hope to see plenty of competition, and I am ready for some good battles this season.” 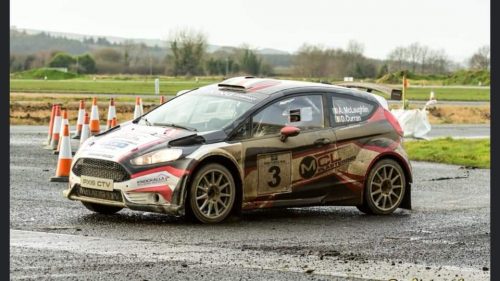