Northern Irishman Alan Carmichael will return to the British Rally Championship in 2021, chasing the Motorsport UK National Rally Champion title behind the wheel of a Hyundai i20 R5.

The ultra-experience Ballymena man finished runner up in the BRC National category in 2019 and was ready to go one better in 2020 before the COVID-19 pandemic halted the series.

Now, piloting his newly purchased right-hand-drive Hyundai, Carmichael will aim to pick up where he left off and secure the title which is open to any vehicle with a Motorsport UK Vehicle Passport and WRC cars up to 2016.

“I’ve been around a long time now and I can afford to be selective with my plans, I love the atmosphere of the British rally Championship and the National title is a great way for me to compete in a relatively new car [Hyundai i20 R5] even though its converted to right hand drive” he says.

“I really want to race people and its looking like there will be a good entry for it so it should be a great craic. I used to be out there pushing like mad and getting quite stressed about it all. But I wasn’t enjoying it much and was taking it way too seriously, now I just enjoy every stage. I know my limits and I`m just out for fun but I certainly want to take the title”.

Carmichael has piloted a wide variety of rally cars in his career, including a MINI WRC and Subaru Impreza S7 WRC, even winning the National section of the Ulster Rally in 2016. Reunited with Welsh co-driver Claire Williams, he feels there is a real buzz about the season.

“The calendar looks great this year and looks very different from before and I like that. It’s been well received and I was eager to come back, it will also be great to have Claire [Williams] in the car with me again. She is a great co-driver and just gets on with the job but is great fun too.”

After renting a PCRS Rallysport Hyundai in 2019 and a handful out outings in a Fiesta R5 last year, Carmichael finally purchased the i20 R5 for his BRC campaign and feels he will head to the season opener with the upper hand.

“Circuits and single venues are really my thing” he muses, “ so I should feel right at home at Oulton Park. I’ve spent a lot of time doing those kinds of events in the past and I really enjoy them so I feel very comfortable with that as the first round of the season. It may take a while for the youngsters to adapt to it but I`ve got my sights set on an overall podium. Wouldn’t that be a great way to start off the season!” 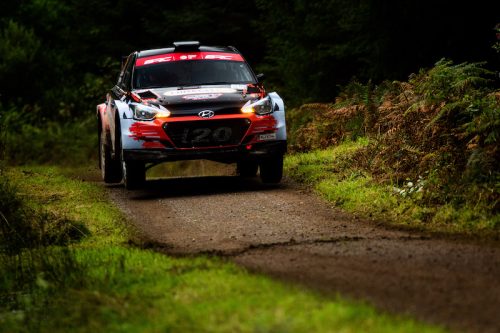