Cameras at the ready as BRC returns to global TV screens

The Prestone MSA British Rally Championship is delighted to announce its continued partnership with mainstream terrestrial broadcaster Channel 4 for the forthcoming season. Britain’s premier rallying series will also be available on sports channel BT Sport throughout 2018.

Building upon the successful past two seasons, Channel 4 will show a 30-minute highlights programme on the weekend after every round this season. The action will also be available to view on Channel 4’s online catch-up service, All 4, shortly afterwards. BT Sport will transmit a longer 60-minute format that will ensure valuable additional coverage for competitors.

Channel 4’s coverage reached over half a million viewers during the 2017 season with Keith Cronin capturing a nail-biting finale win by one tenth of a second to secure his fourth BRC title. Dramatic on-board shots, picturesque aerial footage and heat-of-the-moment interviews are woven into the stage-side action across the gravel and Tarmac tests – all set to captivate rally fans old and new.

Producing the coverage for the 2018 season will be Greenlight Television, who are no strangers to the BRC, as the Isle of Man-based firm filmed the series for many years until 2014. Two new faces will also join the line-up with Kevin Harris presenting each episode, while Richard Nichols will narrate the fast and furious action.

Further complementing the impressive broadcasting package – Britain’s premier rallying series will be transmitted around the world through Greenlight Television’s Motorsport Mundial distribution network which will reach viewers throughout America, Africa, Asia, Europe and the Middle East.

“As the start of the new season approaches, we are delighted to continue the partnership with Channel 4 into a third season,” enthused Prestone BRC Championship Manager Iain Campbell. “This will be an important year for the BRC as the series celebrates its 60th Anniversary. Greenlight Television will be working hard to bring all that heritage to the programmes as well as capturing the unique excitement and championship story throughout the season. This extraordinary broadcast package makes the BRC the best-covered domestic rally championship in the world.”

Head of Marketing for headline sponsor Prestone, Claire Fenton said: “It’s fantastic to have the BRC back on national TV again this year. Channel 4 is an incredible platform for the BRC and the continued partnership will ensure the fast and furious action will reach as many fans as possible.”

“Greenlight is delighted to be involved in bringing the Prestone MSA British Rally Championship to Channel 4 viewers,” said Rob Hurdman, Director at Greenlight Television. “The British Rally Championship is unique in motorsport for the demands it places on drivers, co-drivers, teams and cars and rallying is both widely accessible and relevant – making it breath-taking television.”

Presenting the action-packed shows will be Kevin Harris, a man who is no stranger to the motorsport world. “Having worked with Greenlight Television covering motorsport on either side of the Atlantic and further afield, I’m really excited to be back on British soil getting up close and personal with the British Rallying Championship and bringing it to the Channel 4 audience,” explains Harris.

The five-event, six-round series will once more cover the length and breadth of the British Isles in 2018, with rallies in England, Northern Ireland, Isle of Man as well as an overseas round in Belgium for the exciting Ypres Rally. The season curtain call will come on the FIA World Rally Championship round, Dayinsure Wales Rally GB, where the champion could be crowned on the final stage of the season once again. 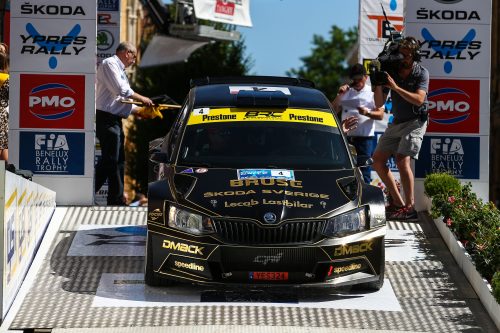