Cambrian Rally comes to the streets of Llandudno

Stages that featured on Wales Rally GB, an Ypres style service area in Llandudno town centre, and minimum road miles, are some of the attractions of next month’s Visit Conwy Cambrian Rally which for the first time in its history will be hosting the first round of the Motorsport UK British Rally Championship, as well as those of the Jordan Road Surfacing BTRDA, Pirelli Welsh Stage and ANWCC Championships.

With support from Conwy County Borough Council, this year’s event on February 15 and 16, looks geared up to be the best ever, and organisers, North Wales Car Club, hope the return to reverse seeding which will see the lower powered cars and Historic vehicles, running first on the road, will help to boost entries and kick off the 2019 British rally season in style.

Cambrian Rally clerk of the course, Alyn Edwards commented: “I am honoured that the Cambrian Rally team has been asked to host the opening round of the Motorsport UK British Rally Championship in 2019. I hope that we can live up the expectations of the championship organisers, and BRC competitors. We have excellent stages to offer and the team are looking forward to the challenge. We are very grateful of the support from Conwy and the confidence they have in the North Wales Car Club to put on an event of this statue within the County of Conwy.”

Councillor Louise Emery, Conwy County Borough Council’s Cabinet Member for Economic Development, said: “We’re delighted to support the Visit Conwy Cambrian Rally again this year, it’s an event that closely fits the aims of our Events Strategy by extending the winter tourism offer.  Being the first round of the Motorsport UK British Rally Championship will bring the event and the county extra profile nationally, and provide a boost to the local economy during a quiet time of the year.”

Alyn Edwards said the Cambrian Rally has risen in stature in recent years and thanks to the support from Conwy County Borough Council, has been able to develop, and raise its’ profile. The event will start (0800 and finish at1530 for Nat B crews) and at 1900hrs Nat A), in Llandudno’s main street where it’s hoped hundreds of people will enjoy watching all day entertainment laid on by Conwy County Borough Council’s events team, and seeing the crews arrive back for service around lunchtime which will take place in the town centre, whilst the British Rally Championship will return at 1530 for a further service, before tackling a further three stages in the dark through Crafnant, Gwydir & Elsi.

The event will retain its one day format using Stages within Llyn Brenig, Clocaenog and within the Betws y Coed and Gwydir forest areas, offer competitors and fans a mouth watering rallying experience, with 45 stage miles on offer for National B competitors, and 65,  for those taking part in the Motorsport UK British Rally Championship. Alyn Edwards says all the stages have been regraded after being used for Wales Rally GB they are in excellent condition following the work of R4W. 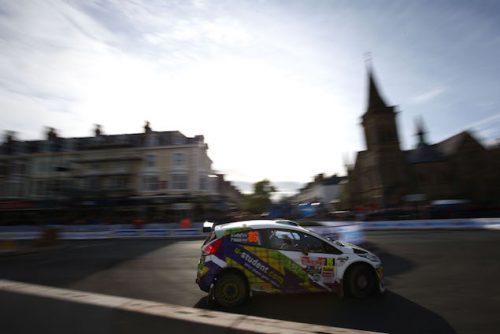