The Cadet Cup forms an integral part of the BRC, with drivers aged 25 and under using the new formula to cut their teeth on the toughest tests the Prestone MSA British Championship has to offer.

Coming into the third round, Josh Cornwell and Richard Bliss had a perfect record and the duo continued their fine form and completed the hat-trick on the Scottish Rally in their Ford Fiesta R2. They are the only crew in all of the BRC classes to have won every round so far this season. However, the pair didn’t have it all their own way this time as on the Scottish they had to work hard for their success, as they were pushed hard by several drivers throughout the weekend.

Tom Williams and Bryan Hull in another Fiesta R2 were on a charge after their second place on the Pirelli International Rally. Eighteen-year-old Williams picked-up his second podium of the year – trading seconds with Cornwell infront. Tom recently competed in the Monteberg Rallysprint which uses similar roads to those on the next round of the BRC – the Ypres Rally. The Englishman will be keen to take his first win as the gap to Cornwell gets ever closer.

Fergus Barlow and Max Freeman put up a good fight in their Fiesta R2 to take a well deserved third. The Man from Mull had a difficult weekend. After having his wisdom teeth out, the Scot also had punctures galore and a broken gear-lever to content with. Making temporary repairs to the lever, Barlow and Freeman recorded a solid rostrum to keep their title tilt alive.

Alex Waterman until the Scottish Rally had a disappointing season to date with two non finishes on the board. Waterman was joined in the co-drivers seat by the experienced Tom Woodburn, who was filling in for Alex’s usual co-driver Harry Thomas. Pushing their striking Fiesta R2 through the 10 stages, Waterman got more comfortable as the weekend went on and was delighted to take his first finish of the year in fourth.

Nabila Tejpar suffered from a big accident on the 2016 running of the Scottish Rally and set herself a goal of finishing the event and build that confidence once again with navigator Charlie Sayer-Payne expertly guiding all the way. Getting to the finish of the event was a big achievement in itself for Nabila, with the crew claiming fifth overall and more importantly Nabila gained a great deal of confidence with every stage mile.

A Cadet shout out goes to Arron Windus and Richard Crozier. Australian Windus flew straight from an Australian rallycross event to the Scottish Rally to put the new Vauxhall ADAM Cup through its paces. Arron showed his speed from the off and was mixing it with the regular R2 runners. Had he registered the Aussie would have claimed a Cadet podium at the end of the event. 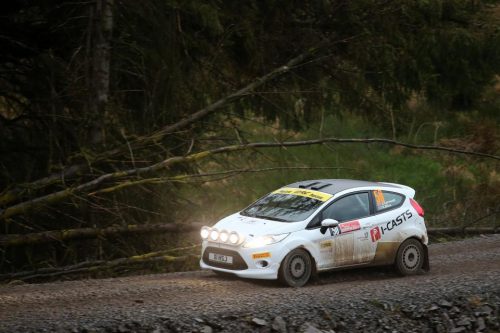