DMACK Junior competitor Blair Brown will be hoping for strong home support as the MSA British Rally Championship rolls into Dumfries for round four of series – the Scottish Rally on June 25.

The Kinross-based driver has had a solid start to the season in his QTS-backed Ford Fiesta R2T with the 20-year-old book-ending his season so far with two points paying positions on the gravel of mid Wales and Carlisle.

The two-day Tarmac test on the Circuit of Ireland provided mixed fortunes for Brown and his co-driver Richard Simmonds running well on the sealed surface. The Scottish duo made a strong start, notching up fourth on the opening stage, while embroiled in a battle for third with Meirion Evans and Josh Cornwell. Blair edged his Fiesta into third by stage five and had almost made it to the end of day one before the clutch cried enough, putting pay to his weekend.

Heading home to Scotland for the latest round of Britain’s premier rallying series, Brown hopes to kick his season up a gear.

“I am looking forward to the home event,” enthused Brown. “I have had my ups and downs on the Scottish especially last year when we didn’t finish. With it being a one-day event it is going to make things very interesting. Our problem at the moment is our notes. If we can practice them and use our knowledge from previous events, we are going to have a great rally.”

Blair, who sits ninth in the DMACK Junior standings, has a few years’ experience under his belt and believes his best events are yet to come.

“The event I am most looking forward to is the Manx at the end of the year. We have been better on the longer events and I have done more on Tarmac with the Fiesta. Infact the first event in the car was on the Isle of Man last year so we have a set of notes and the experience already and with double points at the end of the year lets see what we can do!”

Brown like many others stepped-up to BRC in 2016 and is relishing in the fierce, close-knit battles on every event as he builds his experience.

“I have been competing for five years now. We did the Peugeot 205 Challenge in the Scottish Rally Championship and that was a far as we could go in two-wheel-drive in Scotland and the BRC was the next step. A lot of drivers have turned up and it certainly has become a fierce championship and it is a big challenge against some very quick drivers.

Our speed at the moment is where we expected to be compared to the experience of the other guys. It’s going to take a bit of work to get up there as we have already established it is a two-year-plan for this championship. Places like the Circuit of Ireland need time and respect and we want to learn the events and enjoy this year as we build our confidence and speed for the future. 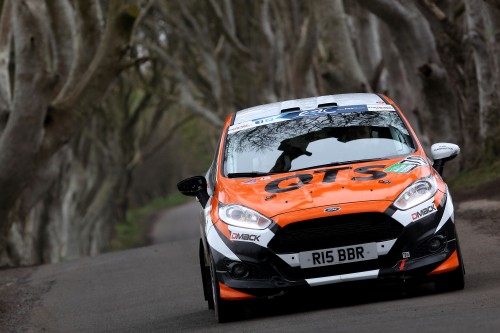