Brown boosted by SORT Oil Spirit of the Rally Award

DMACK Junior BRC competitor Blair Brown recorded sixth place on the fifth round of the MSA British Rally Championship at the weekend as well as SORT Oil Spirit of the Rally Award.

Unable to do a pre-event shakedown, Brown from Kinross and co-driver Richard Simmonds struggled to find a good pace on the mornings tough gravel stages but by afternoon they had found their rhythm taking 11 seconds off their nearest competitor and finishing the day a respectable seventh place in the DMACK Junior Championship. With only a two-hour window to convert the gravel suspension to Tarmac on the Ford Fiesta R2T the small crew made a momentous effort to get the job done and the car ready for day two on the famous asphalt stages of the Epynt Ranges.

With more confidence on Tarmac than gravel the duo decided it was time to go on a push, taking a risk by running on soft tyres at the front rather than wets for the morning stages. The risk paid off and the gap for 5th place was closed from 30 to 13 seconds. By the morning service the heavens had opened and torrential rain gave the crew no choice but to run on wet tyres for the final four stages. Battling through treacherously slippery conditions by Special Stage 15 the gap for 5th place had been closed to a mere 3 seconds. Sadly, the rally was cut short due to an incident leaving the team 6th place in the Junior DMACK championship and 24th overall.

“This has been a real challenge for us this weekend racing on both gravel and Tarmac but the team really pulled together and we have proved that we are as competitive as the larger, more experienced teams,” explained Brown. “I’m pretty confident that we could have secured 5th place as our confidence was high and we were consistently improving our times.”

Co- driver Richard Simmonds added “This event was always going to be difficult with the mixed-surface but we have learned a lot and our confidence is building. We now can’t wait to get out on Tarmac again at the Ulster Rally in 6 weeks’ time.”

There was an added bonus to the weekend when Blair received the SORT Oil Spirit of the Rally award. Brown was declared the unanimous winner by the BRC team and SORT Oil for displaying true spirit to his sport by mucking in and helping his team change the suspension after a day’s racing knowing they were under pressure with the allocated timeframe and secondly assisting a spectator who got stuck on the road section. The Scottish driver jumped out of his own car to help get the grateful spectator off a rock and on his way again. 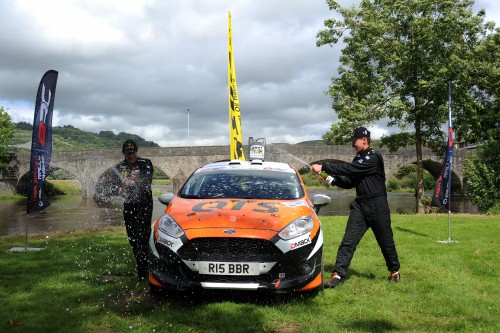