Six plucky BRC crews travelled to Belgium in preparation for the Renties Ypres Rally later this month. To acclimatise themselves to the Tarmac after a round on gravel, the BRC crews chose to contest Rally van Wervik – an event that uses similar stages to the second round of Britain’s premier rallying series.

Continuing their European backpacking trip in their Skoda Fabia R5, The English duo of Rhys Yates and Elliott Edmondson were quickest out of the blocks on stage one – leading local ace Andy Lefevere – a man who has entered Rally van Wervik more times than Iain Campbell has had hot dinners. The Skoda driver got many rally fans excited on both sides of the English Channel with a polished performance to take the win from Belgian hot-shot Guillaume de Mevius, by a staggering 41.1 seconds after 12 stages. Rhys is clearly demonstrating how a lot of seat time has made him gel with his Michelin-shod Czech machine.

“We didn’t expect to win, not at all.” Joked Yates. “After the first stage Elliott and I were laughing that we’d taken the stage win, because we really couldn’t believe it – and it just went on from there. We were here to get better on asphalt and get better in Belgium, so each stage I just wanted to drive better and be more comfortable. After about stage three or four I thought that if we could keep banging out stages like that, then yes, I thought we could win this. We didn’t have any moments, it all felt comfortable from start to finish, and that’s good for my confidence going forward.”

A marvellous achievement for Yates, his first outright rally win. Unlike the build-up for the England football team, who also head to Europe in the quest for silverware, we are going to remain realistic and measured. However, we do believe Yates and Edmondson could ruffle a few feathers for a strong result in Flanders in a fortnight. You heard it here first.

A man who was using Rally van Wervik as an extended test was Yates’ fellow CA1 Sport stable mate David Bogie. The Scotsman only managed one stage on the BRC’s first overseas round last season and hasn’t contested a Tarmac rally since. Warming-up and learning the ditch-cutting ropes, Bogie and co-driver John Rowan dialled in the DMACK-backed Skoda to their liking by the end of the event and can be pleased with seventh overall in Wervik.

“It was good to come to Wervik and get experience of driving on the Belgian roads again.” Said Bogie. “It’s our first asphalt event since last year’s Ypres Rally, and the three-kilometre drive to the opening stage was our shakedown! We lost a bit of time early on, but we got through it, we learnt a lot, we tried a lot of different tyres and different set-ups and we’ve got a good result.”

Unfortunately we didn’t get a chance to look at the form of Keith Cronin and Marty McCormack who had to withdraw due to business commitments. Cronin of course won the BRC section last year and McCormack is a crowd favourite in Belgium due to his heroics in a S2000 car a few years ago. If both get a good first few stages under their belt in Ypres, The Irish duo could also lead the BRC charge against the Belgian heroes.

Lawrence Whyte got his first taste of Belgian asphalt and the young Scot maturely went about his business, as he racked up the miles in his Pirelli-equipped Fiesta R5. Chipping away at progress, Whyte and navigator Stuart Louden can be pleased with 19th overall going into Ypres.

Two juniors fired the opening shots in Belgium, staking their claim for BRC top dog in the front-wheel-drive R2 category. William Creighton and Liam Regan (Peugeot 208 R2) notched up 100km and limbered up nicely for the Junior BRC contest in two weeks. Marty Gallagher and Dean O’Sullivan showed phenomenal speed in their 208 but an accident on stage seven, threw a massive spanner in the works. The French machine was going to be left in Belgium ahead of Ypres, but now Marty and his team are facing a race against time to get the car back to Ireland for repairs before making the return leg.

Johnnie Mulholland and Jeff Case were the lone Cadet Cup runners in their Ford Fiesta R2. After a troubled Pirelli International Rally, Mulholland is revelling in the chance to compete in Ypres and the Wervik warm-up will hopefully enable him to fight for a Cadet podium on round two of the BRC.

While several crews went in search of Belgian Tarmac, a few crews remained in the UK to contest the BTRDA gravel series in Carlisle, another way to keep sharp in the quiet BRC periods.

Matt Edwards has the ambition of winning both the BRC and BTRDA titles and set forth to stand on the top step in Cumbria once again. The power steering failed on the Fiesta R5 resulting in Edwards to turn into Popeye, to wrestle and manhandle the Ford around the stages. Second overall was the reward for Edwards and Darren Garrod, keeping their championship hopes burning bright.

Sasha Kakad and James Aldridge continued to get to grips with their Ford Fiesta R5 and punched in fifth overall – giving them confidence heading into their next BRC round. Cadet recruit Will Graham put himself through a day on the gravel to gain extra seat time ahead of Ypres. 34th overall was his fine reward.

Finishing just one place behind Graham – a special shout out to the winner of the 1400 class – BRC website guru Tommi Meadows. Well done matey, although, I fear we are never going to hear the end of it in Ypres! 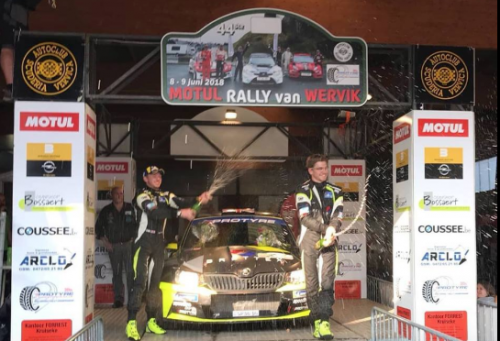