Prestone products are a perfect match for the challenging conditions of the British Rally Championship as the brand ‘Excels in Extremes’. Last year the BRC crews encountered the full range of extremes, from snow and ice, wind and rain to sun-kissed asphalt, as the drivers and co-drivers took on the gravel and mud-lined stages to do battle with each other against the clock.

The BRC is steeped in history, with 38 different champions on the winners’ trophy since its inception in 1958. Legendary names such as McRae, Burns, Vatanen and Clark were joined by rising Welsh star Elfyn Evans in 2016 after a dominant display in the DMACK-backed Ford Fiesta R5.

With the new season fast approaching, anticipation is building. The action-packed seven-round series will once more cover the length and breadth of the British Isles, with stages in England, Northern Ireland, Scotland, Wales and the Isle of Man. For the first time the BRC will venture overseas with the exciting inclusion of the Ypres Rally in Belgium in June.

Free-to-air broadcaster Channel 4 will once again beam dramatic on-board shots, picturesque aerial footage and heat-of-the-moment interviews from every round – the coverage in 2016 reached more than 1 million people, captivating rally fans old and new.

“We are thrilled to welcome Prestone to the BRC as title partner,” said Ben Taylor, Managing Director of championship organiser International Motor Sports. “To secure the backing of such a major brand is a huge endorsement of what we achieved last year and enables us to push forward with the development of the championship to make it even stronger in 2017. As a brand, there can be no better fit than with the sport of rallying – testing man and machine against the elements and the clock. We look forward to working closely together to ensure that the BRC provides the perfect marketing platform throughout the year, building to a presence on Dayinsure Wales Rally GB in October where Prestone will also be an official supplier.”

Head of Marketing for Prestone, Claire Fenton said: “We are incredibly excited to be named as the title partner to the MSA British Rally Championship. The drivers and cars involved in the competition literally ‘Excel in Extremes’, just like Prestone, battling through the elements and pushing to the very limit. The conditions facing the British Rally Championship are exactly what Prestone has been designed and tested for, using engineered technology in the most challenging environments to protect the engine and perform in even the most extreme conditions.

“We can’t wait to get involved in the action, out on the stages and under the bonnet of some of the world’s most extreme rallying machines.” 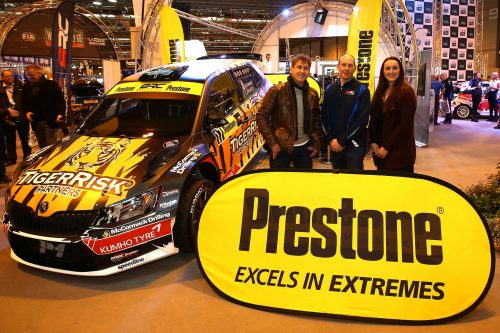