The 2016 MSA British Rally Championship resumes next weekend (25 June) following an eight-week break for the fourth round of the series. After a flat-out test through the Cumbrian forests last time out, BRC competitors travel to Scotland for the RSAC Scottish Rally where Britain’s premier rallying series continues on gravel in the fast and challenging forests around Dumfries. The BRC runners will not only have to fight each other for success, they will be joined by the MSA Scottish Rally Championship competitors, who hope their local knowledge will pay dividends over the classic stages.

The opening three rounds of the British Championship have seen three different winners take the spoils, with World Championship star Elfyn Evans, highly talented Irishman Josh Moffett and Swedish sensation Fredrik Ahlin each claiming the top spot over the course of the opening three events. The Scottish Rally, is a one-day shoot-out for supremacy on the last all-gravel rally of the season. The event will take in 62 action-packed miles through the picturesque Scottish Lowlands, with crews starting and finishing the event in Dumfries town centre.

Winner of the previous round, Ahlin moved into the Championship lead in his Ford Fiesta R5 as he doubled his 25 points by tactically playing his ‘Joker’ on the Cumbrian stages. With his confidence and hunger for success at an all-time high, Ahlin will be one of the favourites heading to Dumfries. The Swedish driver won’t have it his own way, however, as a chasing pack will all want to topple the 24-year-old from the top step.

CA1 Sport and Pirelli-shod team-mate David Bogie will be hoping for the home advantage on round four of the series. The Skoda Fabia R5 driver lives in the area, and knows the stages like the back of his hand after four wins on the event including a dominant victory last year. The Scottish driver has scored two podiums this year, but will be eager to get himself back into the title race with a win on home soil next weekend.

Fellow Scottish stars Euan Thorburn (Peugeot 208 T16) and Alex Laffey (Ford Fiesta R5) will be hoping for a strong showing on home ground. Thorburn bagged a top five on the opening round but ever since has been dogged by unreliability. The Scottish Rally will hopefully see a turning point in the Peugeot driver’s fortune. Tarmac ace Laffey has been building his experience and speed throughout the season and will use the Scottish event to get further miles under his belt for a push on his preferred surface in the latter part of the campaign.

Welshman Elfyn Evans has had a run of bad luck on events since drawing first blood on the opening round of the season on the Mid Wales Stages. Evans’ Fiesta R5 suffered a puncture on the Pirelli Carlisle Rally but stormed back through the field to claim a vital podium to keep his title tilt alive. The DMACK British Rally Team driver will have the bit between his teeth as he hopes to become the King of Scotland and overhaul Ahlin in the championship chase at the end of the event.

Winner of the BRC section on the Circuit of Ireland, Josh Moffett returns to the series after electing to miss the Pirelli Carlisle Rally in order to focus on his Irish Championship attack. Moffett sits third in the standings and will hope to remain on the coat tails of Ahlin and Evans as he is just one of many drivers in with a shout of a rostrum finish.

Tom Cave and Jamie Anderson have both had a busy mid-season break in their Fiesta R5s. Cave sits fourth in the table, having never been out of the top four on the results sheets and after a comfortable victory on the non-championship Plains Rally he is fired-up to stand on the podium once more. Anderson also notched up a win, this time on the non-championship Severn Valley Stages and he will similarly be looking for a top result as he hopes to better his fifth overall on the Circuit of Ireland.

Ollie Mellors, who finished third behind Anderson on the Severn Valley Stages in his striking SORT Oil-backed Proton Satria S2000, will want to put his raw speed into practice as he proves the naturally-aspirated machine can mix it with the turbo screamers.

Desi Henry has also been successful during the championship calendar break, taking the spoils on the DMACK Carlisle Stages earlier this month. Henry has been refining his potent Skoda Fabia R5 as the Irishman guns for a podium position in Dumfries next weekend. Jonathan Greer has likewise been keeping himself sharp in his Citroen DS3 R5, and the Ulsterman will be looking for another strong points haul before running on his preferred asphalt surface later in the season.

Sheffield driver Rhys Yates will have a new Michelin-backed Ford Fiesta R5 Evo at his disposal for the Dumfries-based event and the young gun will be hoping to get to grips with his new mount quickly as he looks to bag more points to elevate him in the championship standings. The newest recruit in BRC1, Thomas Preston will be keen to chalk up his first BRC points in his Skoda Fabia R5 after a solid first round on the Pirelli Carlisle.

In the fiercely-competitive DMACK Junior BRC, the fight for bragging rights is wide open and a battle royale is set to resume in the forests of Scotland with 11 junior drivers in action. Winner of the Circuit of Ireland and Pirelli Carlisle Rally, Robert Duggan in his Vauxhall ADAM R2 sits at the top of the tree, with his ‘Joker’ still to be played. Vauxhall team-mate Mattias Adielsson will be chasing his first BRC win as will Renault Twingo R2 driver Sindre Furuseth. All three will look to build a gap to Mid Wales Stages winner Gus Greensmith in the standings as he elects to miss the Scottish event due to World Championship preparation.

There is a chasing pack all eager to score highly and tally a podium on the most northerly event on the calendar. Adam Bustard in his Ford Fiesta R2T will have his sights set on continuing his top three form in Scotland, while Meirion Evans (Fiesta R2T) will want to be fighting at the sharp end after a rigorous development programme during the mid-season break. Blair Brown in another Fiesta R2T will hope to shine on home soil as he is out to better his career-best sixth in mid Wales.

Josh Cornwell, Nick Carr, Nabila Tejpar and Umberto Accornero will all be chasing further points while Australian Guy Tyler will be hoping to get on the scoreboard after a difficult start to his campaign.

In the BRC2 category, Matt Edwards in his Mitsubishi Evo 9 has an unassailable lead in the series and if the Welshman finishes the Scottish Rally he will extend his firm grip on the championship for production-based machines.

In BRC3, Chris Wheeler in his Citroen DS3 R3 will look to overhaul Top Gear presenter Chris Harris in the standings, while Tony Simpson will be keen to make headway in BRC4 in his Kumho-shod Fiesta with the absent Roger Platt and Marty Gallagher electing to sit out the Scottish Rally.

In the BRC National Rally Cup, championship leader Donnie Macdonald will be targeting three wins in a row on home soil in his Mitsubishi Evo 9. Expect Macdonald to do battle with Jamie Jukes and Robert Blomberg, both in Mitsubishi Mirages while Lee Hastings and Nigel Feeney will both want a podium finish in their Subaru Imprezas. John Morrison in his Evo 9 will be looking to build on his Pirelli Carlisle podium as Thaarique Fazal will be hunting his first NRC points come the close of play.

BRC Championship Manager Iain Campbell is looking forward to the one-day shootout, which is set to rage through the forests of Scotland next weekend.

“The RSAC Scottish Rally will be a real sprint for all our crews,” he said. “You cannot feed yourself gently into the event after the mid-season break – you have to go flat-out right from the off. With so many stage miles in one day, it will take its toll on not only the crews but the cars as well. The teams will have to find that balance of speed while keeping out of trouble. If you retire, that is it, there is no second chance or restart tomorrow. It is going to be a real challenge, and we could well see a fourth different winner in as many events.” 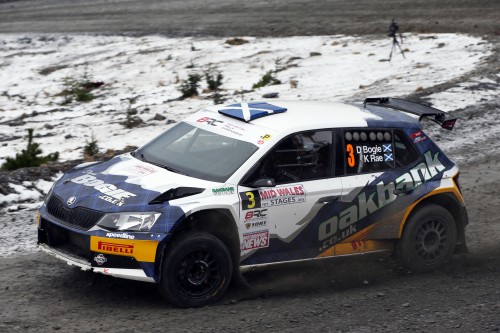