The MSA British Rally Championship blasts back to life next weekend (5/6 March) as no fewer than 54 registered crews from 11 nations tackle the opening round of the series, the Newtown-based Mid Wales Stages.

After a year’s sabbatical, the revitalised BRC returns with a new breed of cars, stars and classes for the 2016 season. The championship’s top category will feature 4-wheel drive competition for the first time since 2011, as the exciting new R5 cars do battle with S2000 machinery at the front of the field. Support classes include the DMACK Junior BRC that will showcase the talents of the best young drivers in 2-wheel drive R2 specification cars while the National Rally Cup offers the challenge of longer rallies for non-homologated vehicles.

The Mid Wales Stages hosts the opening round of the new championship and its classic stages will be a genuine early-season test for the crews. The first two stages take place on Saturday evening, requiring bravery, commitment and strong lights as drivers thread their way through 26 challenging miles in the depths of darkness.

On Sunday, the crews embark on a day of flat-out competition over classic Wales Rally GB stages including Myherin, Sweet Lamb, Hafren and Pike’s Peak with the winner being crowned in the centre of Newtown in the early afternoon.

Further underlining the renaissance of the new championship, ten manufacturers will be represented on the first round with models from Citroen, Ford, Mitsubishi, Peugeot, Proton, Renault, Skoda, Subaru, Toyota and Vauxhall all lining up to contest the six gravel stages.

BRC1
WRC star Elfyn Evans and co-driver Craig Parry will lead the teams away on Saturday evening in their Ford Fiesta R5, ahead of a host of drivers aiming to prove they have what it takes to claim the title. Previous BRC champions David Bogie (Skoda Fabia R5) and Keith Cronin (Citroen DS3 R5) will be keen to repeat their previous title successes, while Euan Thorburn (Peugeot 208 T16 R5) and Marty McCormack (Skoda Fabia S2000) will be looking for a good start to their campaigns.

Underlining the strength of the Irish contingent, Jonny Greer (Citroen DS3 R5), Desi Henry (Skoda Fabia R5), Robert Woodside and the Moffett brothers (all Fiesta R5) will put up a formidable challenge, many of them combining their BRC endeavours with an Irish Tarmac campaign.

Jamie Anderson, will be hoping to put up a strong defence of his Mid Wales title, while another previous winner Tom Cave and navigator James Morgan face a race against time to get their Fiesta back on the road after a dramatic accident on last weekend’s Red Kite Stages. Two other Fiesta R5s will feature in the hands of Rhys Yates, who steps up from the English Rally Championship, and tarmac specialist Alex Laffey who will be learning fast on the Mid Wales Stages having not contested a gravel rally since 2011. Meanwhile Ollie Mellors is out to prove that the Proton Satria S2000 is still a match for the newer R5 cars.

Making a return to the BRC for the first time in 16 years is Neil Simpson in the Skoda UK-supported Fabia R5 that has looked mighty quick in pre-season testing. Other drivers aiming to prove the value of experience over youth are multiple MSA Asphalt champion Damian Cole in his Fiesta S2000, former BTRDA champion Hugh Hunter who has acquired a new Fiesta R5 and James Slaughter who simply couldn’t resist the challenge of getting back behind the wheel at the top level of stage rallying.

With a staggering 21 cars fighting for honours in BRC1, the competition is expected to be absolutely fierce and with such a variety of makes and models, as well as an open tyre formula, it makes it almost impossible to pick a winner at this stage.

DMACK Junior BRC
The DMACK Junior BRC is designed to provide the ultimate proving ground for young drivers under 26 years of age. The £60k prize fund value on offer to the champion from series sponsor, DMACK Tyres, has attracted a stunning entry that guarantees a closely fought championship in this first year.

Leading the way in a truly international field will be highly rated Swedish star Mattias Adielsson who heads a three-car Vauxhall Junior Rally Team assault in a trio of ADAMs. Norwegian Sindre Furuseth in a lone Renault Twingo will follow before an army of Ford Fiestas, spearheaded by Australians Rhys Pinter and Guy Tyler.

Englishman Gus Greensmith heads the home challenge and, alongside Welshman Meirion Evans, Scot Blair Brown and Irishman Robert Duggan, could form the introduction to an old-school gag. The comedy will be saved for later, however, as the Junior crews prepare to fight for victory in Wales and lay down an important marker for the rest of the season.

BRC2
Chasing the BRC1 runners will be the hotly contested BRC2 class, which is home to such iconic vehicles as the Subaru Impreza and Mitsubishi Lancer. Phillip Morrow, Roland Llewellin and 2010 Mid Wales Stages winner Matt Edwards will be hoping to get among the front-runners.

BRC3
In the BRC3 category, newly announced BBC Top Gear presenter Chris Harris will debut the exciting Toyota GT86 CS-R3, but will be up against stiff competition from young hot-shot Chris Wheeler in a Citroen DS3 R3T.

BRC4
The BRC4 class features the same R2 machinery as used in the Junior championship, but for drivers who just fail to make the 26 year old age cut-off! Tony Simpson, Roger Platt and Marty Gallagher are likely to enjoy a close battle on these longer events, but will have downhill mountain bike legend Gee Atherton trying to deliver a giant killing performance on his local stages in Wales.

National Rally Cup
In the National Cup home-grown heroes Osian Pryce and Dale Furniss will be challenging for honours in their Spencer Sport-run Mitsubishi Mirage. As well as looking to win their class, the Welsh duo will have their sights set on breaking into the top ten overall, as will teammate Jamie Jukes and fellow Mirage driver Robert Blomberg. They will face a stiff test from a number of experienced crews who are stepping up to the longer stage mileage on offer alongside the BRC show.

Ben Taylor, Managing Director of championship promoter International Motor Sport, is buoyant ahead of the new season. He said: “In the course of the past 20 months, there has been so much work involved to get to this point and it’s really exciting how things are taking off. So many people have played a part in what has been achieved and it is incredibly gratifying that the competitors have responded so enthusiastically. It’s great for the sport that people are talking positively about rallying again and I can’t wait for the new season to get underway!”

BRC Championship Manager Iain Campbell echoes those sentiments: “I really can’t wait until the end of the first two stages on Saturday night.  Not only will they be a huge challenge to the crews, it will mean that after all the work from everyone involved and all the hype and anticipation, BRC 2016 will have something tangible.  We will have results on the board; we will have heroes, we will no doubt have some heartbreak and the story of the season will have started.

“From having had a year away, it was never on my radar that we would have such a high quality and quantity of entry for the start of this programme.  Now the really hard work starts – maintaining the forward momentum for the future.”

The new-look BRC will take in seven events across the British Isles as it tours England, Ireland, Wales and Scotland before culminating on the iconic lanes of the Isle of Man. Asphalt special stages and gravel tests will see the country’s best drivers in the best cars fight for overall supremacy on the best events, while the action will feature throughout the year on Channel 4 and BT Sport.

The final event will count for double points, while each driver has one ‘Joker’ to play on one of the first six rounds. Selected a week before each round, a ‘Joker’ can only be played only once and will enable a driver to double the points scored on that nominated event. 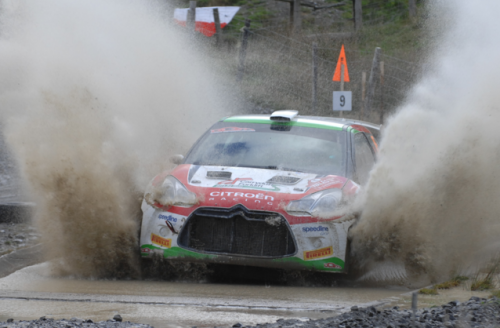