With just days until the start of the 2017 Prestone MSA British Rally Championship, Britain’s premier rallying series is ready to fire into action with a raft of exciting changes and developments ahead of the new season. Here is your guide to the year ahead.

New name above the door

The biggest news over the closed season was the announcement of global brand Prestone as title partner to the BRC. The number one antifreeze/coolant manufacturer in the US, and a major force in the UK, announced its partnership at the Autosport International Show in January, further strengthening the championship’s position as one of the best national rallying series in the world.

Prestone products are a perfect match for the challenging conditions of the British Rally Championship as the brand ‘Excels in Extremes’. Prestone will be fully supporting the series with an exciting activation plan with visitors to every round of the championship being able to try out the Prestone Rally Simulator.

Spectators will be able to get behind the wheel and set a time against the BRC professionals. The person with the fastest time at each round will receive a Virgin Experience Introductory Rally Driving Day. The overall winner – the driver with the fastest stage time across the entire BRC season will scoop a money-can’t-buy experience. He or she will have the chance to ride along as a passenger in a rally car, receive a behind the scenes tour of the manufacturer service areas and Rally Control during Dayinsure Wales Rally GB when the FIA World Rally Championship comes to the UK in October.

Where are we going? New-look calendar

The new-look, seven-round series takes in events across Britain as well as an overseas round in Belgium – the first in BRC history. Jedburgh Abbey will provide the dramatic backdrop for the start of the season as crews are flagged off into a new round – the Brick & Steel Border Counties Rally. Two eye-opening night stages will get the high-octane action underway, before a daylong battle royale in the forests the next day. Following on from the Border Counties Rally are two staples of the BRC, the iconic Pirelli International Rally and RSAC Scottish Rally.

Another exhilarating new addition for 2017 will be the Kenotek Ypres Rally in northern Belgium in June. The fast and flowing Belgian roads will represent a new challenge for most of the competitors and will offer the opportunity for the BRC crews to go head-to-head with some of the best drivers in Europe. The whistle-stop tour continues with the mixed-surface Nicky Grist Stages, followed by the demanding roads of the John Mulholland Motors Ulster Rally before the season finale on the picturesque Isle of Man. Double points are up for grabs on the 138.com Rally Isle of Man with the 2017 Champion potentially being crowned on the final stage on the final event of the campaign.

Adding to the spice, each driver can nominate their ‘Joker’ on one of the first six events. If drivers play it right and win their class, an extra five points will be bagged towards the championship standings, with four points for second down to one point for fifth. Any driver playing his or her Joker and finishing outside the top five will still score a bonus point, providing they finish the rally without having to restart and resort to Rally2.

Highlights from all seven rounds of the championship will be beamed into homes across Europe free-to-air on Channel 4 and via satellite partners BT Sport and Motorsport TV.

The coverage will once again be produced by Hayfisher Productions with the enthusiastic voice of rallying, Colin Clark fronting the programme and Jon Desborough providing the charismatic narration.

What runs where? New season, new classes and new awards

The top-flight category, BRC1 is home to the turbocharged, four-wheel drive R5-specification monsters at the front of the field. Cars from Citroën, Ford, Hyundai and Skoda are primed to do battle across the seven events.

The Production Cup is for cars that are closer to their road-going counterparts. The iconic Subaru Impreza and Mitsubishi Evo models will be out to entertain on the stages this year.

The Junior BRC is for drivers aged 26 years and under in R2-specification front-wheel drive pocket rockets. A new crop of exciting drivers from Australia, England, Northern Ireland, the Republic of Ireland, Norway and Wales will fight tooth-and-nail for overall honours in 2017.

The newly-formed Cadet Cup provides the perfect stepping-stone to the Junior BRC, and will become home to the older specification Ford Fiesta R2 as well as the new Opel ADAM Cup and Ford Fiesta R2T National models. For budding young drivers aged 25 and under, this category is perfect for making the step up from clubman competition. There is also a great carrot at the end of the season, with the overall winner gaining free entries into every round of the BRC in 2018.

BRC3 is home to the striking, sideways Toyota GT86 and the giant-killing Citroen DS3. That age-old question of rear or front-wheel drive may be answered this year when they face each other in the forests and Tarmac lanes.

BRC4 follows the same class format as the Junior BRC but for drivers over the age of 26.

The NRC caters for all rallying machinery with an MSA log-book, making it the perfect class to join the BRC and enjoy the same quality stages as some of the best drivers in Britain.

The MSA two-wheel-drive trophy is open to drivers and co-drivers competing in the Junior BRC, Cadet BRC, BRC3 and BRC4. The best four scores from the eight scoring opportunities will go towards this new award.

Another new addition to the championship is the Ladies’ Trophy. With many great lady drivers in the history of the BRC such as Michelle Mouton and Louise Aitken-Walker, the award is designed to help drive the next generation of female talent.

Not only will the crews, teams and marques do battle this year but five tyre manufacturing giants – DMACK, Hankook, Kumho, Michelin and Pirelli – will all slug it out for supremacy in 2017.

The Junior BRC was one of the most hotly-contested classes last season, and this year is set to be no different with a new crop of talented drivers signed up to the series. New for 2017 is the £30,000 cash prize on offer to the champion at the end of the hard-fought campaign to help further their career. The category for R2-specification front-wheel drive pocket-rockets is home to drivers aged 26 years and under and with an open tyre formula – this will certainly add an extra ingredient into the mix.

Further prizes are on offer for Peugeot drivers from Peugeot Sport UK and Ireland distributer, Race and Rally. With a €10,000 parts voucher prize pot on offer, expect a close-fought scrap between the Peugeot 208 drivers throughout the year.

Keep up-to-date with the BRC

The full entry list for the first round – the Brick & Steel Border Counties Rally – can be viewed here with more entries being placed in the run-up to the season-opener.

The wait is almost over. The 2017 season is set to blast off in Jedburgh on 17/18 March. Keep tabs on all the latest BRC developments by visiting www.msabrc.com or following us on social media: MSA British Rally Championship on Facebook, on Twitter and on Instagram using #BRC 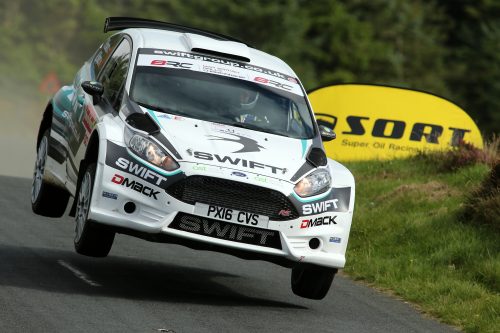