The MSA British Rally Championship returns to the iconic Circuit of Ireland next weekend (8/9 April) following a 25-year absence, with the best of British stars going head-to-head with the best in Ireland and Europe over 200 kilometres of closed road action.

After a year’s sabbatical, the revitalised BRC made a triumphant return on the opening round of the season, the Mid Wales Stages. With great anticipation and excitement at fever pitch, the new breed of cars, stars and classes met the expectation and put on an entertaining show to relaunch Britain’s premier rallying series.

The classic stages as used on Wales Rally GB provided the setting for an event-long sparring match between Swedish star Fredrik Ahlin and eventual winner, WRC ace Elfyn Evans. The Welshman not only took the event win but leads the championship by 35 points after employing his ‘Joker’, which doubled his points. With Elfyn now having played his card, the rest of the field will look to haul in the DMACK BRC driver when the Circuit of Ireland gets underway next weekend.

Over 40 registered BRC crews will leave the Belfast ceremonial start on the Thursday evening (7 April) ahead of two action-packed days through the lanes of Northern Ireland.

The event will see the BRC share the stages with the European Rally Championship and Irish Tarmac Championship, and leading the cars away will be 2015 event winner and former BRC title challenger Craig Breen.

BRC Championship leader Evans is the first BRC-registered competitor at car two in his DMACK-backed Ford Fiesta R5, with points-topping Irish Tarmac Championship driver Keith Cronin seeded at number five. Cronin is dovetailing his Irish exploits with a full BRC campaign in his Citroen DS3 R5, and the three-time BRC champion will be looking to get his title tilt back on track after a disappointing opening round in Mid Wales. DGM Citroen stablemate Jonathan Greer will also be on the charge in search of more points to add to his 2016 BRC tally.

CA1 Sport will descend upon Ireland with a three-car line-up, spearheaded by Ahlin and David Bogie in a Ford Fiesta R5 and Skoda Fabia R5 respectively. Both will be in the hunt for the outright win as they look to close the gap to Evans in the fight for the title. The third car in the CA1 fold will be for Tarmac ace Alex Laffey, who returns to his preferred surface after a learning weekend on the Mid Wales Stages in his Ford Fiesta R5.

Tom Cave finished on the podium on the opening round in his Spencer Sport-run Fiesta R5. The Welshman will certainly be a threat in his Michelin-shod car on the Circuit’s bumpy asphalt, while fellow Michelin runner Rhys Yates will be searching for his first points in his luminous yellow and black Fiesta R5.

The Circuit of Ireland will see several homegrown heroes hoping for the luck of the Irish. Robert Woodside will campaign his Karcher-backed Fiesta R5 on familiar ground while the Moffett brothers – Josh and Sam – will once again be challenging for a top five result on home territory. Countryman Desi Henry gained a top ten finish in Wales last time out and will be hoping for more of the same on the Belfast-based event, while fellow Skoda Fabia R5 driver Neil Simpson will look to use his wealth of ERC experience to good effect as he puts the troubles of Mid Wales behind him.

Multiple MSA Asphalt Champion Damian Cole is a driver not to be discounted on his preferred surface as the Welshman guns for a top result in his S2000-specification Fiesta, while Euan Thorburn will bring his Peugeot 208 T16 to a happy hunting ground for the French marque. In the hands of Craig Breen, the 208 won the event 12 months ago and Thorburn is eager to emulate the Irishman’s success on the two-day classic.

The Tiger Risk Rally Team will be hoping for a trouble-free event on the Circuit after a difficult first round. James Slaughter missed the Mid Wales Stages in his Fiesta R5 due to business commitments, while the highly-rated Martin McMormack suffered differential problems with his Skoda Fabia S2000 before the action got underway. Both drivers will be aiming for mileage and a solid result after the demanding 14 stages.

Max Vatanen, Jamie Anderson and Hugh Hunter all have limited asphalt experience but are not to be underestimated on the tough Tarmac tests. All three will want to build experience and take the fight to the sealed-surface regulars, while Ollie Mellors will run in the National field in his striking SORT Oils Proton Satria S2000.

In the fiercely-competitive DMACK Junior BRC, the battle is wide open with the top two in the championship – Gus Greensmith and Sindre Furuseth – opting to sit out the second round of the series. Leading the Juniors away in his Vauxhall ADAM R2 is local rising star Robert Duggan, who will hope to claim victory and leap up the table before the weekend is out. Team-mate Mattias Adielsson also has Circuit of Ireland experience and will represent a big obstacle for Duggan in the scrap for supremacy. Josh Cornwell played his Joker in Mid Wales and will look to carry the momentum across the Irish Sea, while Arron Windus, Blair Brown, Umberto Accornero and Nabila Tejpar will all be looking to add further points to their tally. Adam Bustard, Meirion Evans and Will Graham will hope to kick-start their championship aspirations into life on the Irish event.

In the BRC2 category, Matt Edwards was one of the head-turners in Mid Wales as he flung his Mitsubishi Evo 9 into the top ten overall, putting many more powerful R5 cars behind him. Edwards will have a fight on his hands if he wants to make it two out of two, however, as local driver Phil Morrow in a similar Evo 9 is tipped to be the man to beat on the asphalt roads. Roland Llewellin in a younger Mitsubishi Evo 10 will want to consolidate his position in the top two in the championship.

In the BRC National Rally Cup, Sweden’s Robert Bloomberg will be searching for maximum points as he looks to close the gap to Osian Pryce who sits out the rally. Jamie Jukes and Donnie Macdonald will also likely be in the hunt for an NRC podium come the end of the event.

BRC Championship Manager Iain Campbell is looking forward to the immense spectacle that is set to take place next weekend.

“The Circuit of Ireland is returning as our ‘jewel in the crown’. The opportunity for our competitors to take on the best of Europe and Ireland, head-to-head is going to be quite something to see. There was plenty of drama on the opening round, the Mid Wales Stages throughout the classes and there is no reason to think that it won’t be any different next weekend. 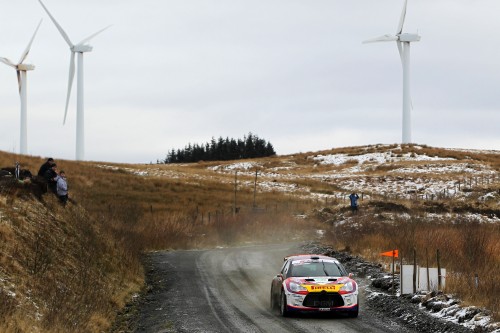