The Motorsport UK British Rally Championship will blast back into action next weekend [23 – 24 April] as the Corbeau Seats Rally Tendring & Clacton plays host to the opening round of the season for the first time in the BRC’s impressive 64-year history.

The closed public roads of the Essex seaside resort will provide an uncharted start to Britain’s premier rally series which will see an inspiring list of contenders, from former champions to energetic newcomers all keen to start their championship campaigns in fine style.

A blistering array of top-flight BRC1 crews in Rally2 machinery will line up to do battle over the two-day event, and they will be joined by contenders in the National Rally Title who will be gunning for the sought-after honour.

Added to the four-wheel-drive heavy hitters, a dynamic and impressive list of ultra-rapid Junior and Academy drivers will kick-start their season in Clacton, with a chance of winning a supported drive in a round of the 2023 FIA World Rally Championship, behind the wheel of a Hyundai Motorsport Customer Racing i20 N Rally2 up for grabs.

A new-look BRC calendar will take crews to some of the most challenging and highly regarded rallies in the UK this season, but for now, the Clacton curtain raiser will be the main focus for some of the best drivers in the UK.

A short seafront fan-favourite blast around Clacton opens proceedings on Saturday evening but the short double-header is unlikely to win the rally for the BRC protagonists, but it can certainly be lost on the unforgiving kerbside roads. Sunday houses the bulk of the mileage with 14 stages and over 50 miles in store during the course of the weekend.

Heading the challengers is 2021 BRC runner’s up Osian Pryce and co-driver Noel O’ Sullivan. Pryce was the nearest challenger to Matt Edwards’ title chase last season in the Melvyn Evans Motorsport run Volkswagen Polo GTi. It was as close as it gets with the Welshman pushing his teammate to the final loop of stages on the final rally of the season, before crashing out on the penultimate stage of the year.

Pryce will be looking for redemption this time around and understandably his passion for that elusive BRC crown is as intense as ever. But there is a queue of talent right behind on the road, ready and willing to usurp his title chase.

And the heavy hitters don’t come much more impressive than Irishman Keith Cronin. The most experienced driver on the tour, Cronin has a sensational four BRC titles to his name and mounted a shock return to the series last season.

This time around however, like Pryce, he will be behind the wheel of a Polo GTi and with Mikie Galvin on the notes, will be a force to be reckoned with if their pace at the end of last season was anything to go by. With a record-equalling fifth title up for grabs, expect Cronin to be gunning for glory in 2022.

Continuing the Polo theme, three-time National Asphalt and British Historic Rally champion Jason Pritchard also makes a surprise return to the BRC after 11 years away. Pritchard and co-driver Phil Clarke were searching for a new challenge in 2022 and have laid down their intent for a sought-after BRC honour to add to the list.

Reigning National Rally Title champion Garry Pearson was a tour-de-force in the category last season and aims to put that speed to good use this year, by registering for BRC1 in a Ford Fiesta Rally2. Pearson also scooped the Welsh, Scottish, and National gravel titles in 2021 so will undoubtedly be at the forefront this time around.

Elliot Payne and Tom Woodburn add more Ford flavour to the front runners, bringing their Fiesta Rally2 to the party for the first time in the BRC1 class. Having tackled the National category last season, Payne’s pace has quickly improved with a non-championship rally win in November a sign of things to come. A lack of asphalt experience may hamper progress on the opener however.

Taking third place in the Junior BRC back in 2019, James Williams graduates to the BRC1 top-drawer this season and is the sole Hyundai entry in an i20. Williams and co-driver Dai Roberts have settled into the new machine after outings in Ulster last year and a podium at the non-championship East Riding Stages in February.

Andy Davies is another to tackle BRC1 for the first time after recently acquiring a Ford Fiesta. Davies is well known for his giant-killing exploits in an ageing Subaru Impreza on both surfaces so could well throw his hat into the ring on his debut year. He has the experienced Rob Fagg on the notes.

Junior BRC graduate Ruairi Bell is one to watch out for as he pilots a Skoda Fabia on his first campaign in four-wheel-drive machinery. Winning the Nicky Grist Junior category in a Fiesta Rally4 last year shows his capability and Bell will look to increase his experience and pace as the year progresses.

Leading the National Rally Title charge [for non-homologated cars running to Motorsport UK regulations], Craig Jones pilots his unique Ford Fiesta Proto in the National category with co-driver Ian Taylor alongside after making the switch from the National Asphalt Rally Championship to the BRC. William Mains will be aiming for some giant-killing exploits in his 1400cc Vauxhall Nova.

Storming to a brilliant debut Junior BRC season in 2021, Eamonn Kelly and Conor Mohan pushed champion William Creighton all the way to the final round, taking the runner up spot in fine style. Notable pace and a Grampian Rally win, saw the Fiesta Rally4 duo stamp their mark on the Junior scoreboard; expect more of the same this time around as they return for a second shot.

Kyle White and Sean Topping upgrade from their older Peugeot Sport 208 R2 to the new Rally4 machine this season and having led the Juniors in the early stages of 2021, will be calling on their experience to put them in good stead this year. John Easson Award winner Ioan Lloyd and co-driver Sion Williams also head to the championship in a 208 Rally4, tackling the series for the very first time.

Staying loyal to the Ford brand, last year’s Academy Trophy champion Johnnie Mulholland upgrades to a Fiesta Rally4, as does Fraser Anderson with Sinclair Young in the co-drivers seat. Ola Nore Jr brings an international feel to the category with the Norwegian driver also piloting a Fiesta Rally4 with Brit Jack Morton on the notes.

Kyle McBride campaigns a Fiesta in the entry-level Academy and is searching for the title which would net him free entry to the Junior BRC rounds in 2023. 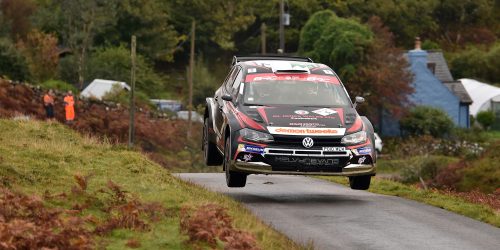