For the first time in its illustrious history, the British Rally Championship will descend upon West Sussex for the Goodwood Festival of Speed presented by Mastercard this summer (9-12 July). The overarching theme for the festival this year is ‘The Maestros: Motorsport’s Great All-Rounders’ and makes a fitting backdrop to the BRC, a series that boasts some of the greatest all-rounders in its 62-year history.

The stars and cars from Britain’s premier rally series will join the world’s largest motoring garden party, where more than 200,000 members of the public will be in attendance over the four-day celebration of our automotive past, present and future. The BRC will join stars from Formula 1, Le Mans, NASCAR, the Isle of Man TT and Dakar in a new addition to the season schedule, which is set to get underway on the Visit Conwy Cambrian Rally (8 February).

Goodwood’s all-gravel Forest Rally Stage, designed by former BRC front-runner and 1983 world champion Hannu Mikkola, will play host to the modern day British championship for the first time in 2020.The selected stars of the BRC in their R5 and R2 machines will run throughout the four days, with the drama set to build as they hold timed shootouts through the idyllic three-mile woodland stage.

Between their runs, the cars and service teams will on display in the paddock area, adding to the existing collection of historic rallying greats at the open access service area while being able to grab a selfie, autograph or chat with the drivers. As ever, some of the most important historic rally machinery from the 1950s to the 2000s will also be put through their paces on the Forest Rally Stage and parked up adjacent to the BRC front-runners.

Places will consist of championship positions after the second round of the series (West Cork) and invites from the BRC and Goodwood. Ten crews will then come together to represent the BRC in the prestigious shootout in July.

“The Forest Rally Stage is a must-see element of our event, bringing the action as close as possible to a vast audience which may not have previously experienced stage rallying at first hand.

“I am delighted that we will be hosting a series of such significance in 2020, and that our sell-out crowd in excess of 200,000, plus our millions of followers around the world via the livestream, will be able to savour some of the brightest talent in the sport doing what they do best.”

“It is an absolute honour for the British Rally Championship to be a part of the Festival of Speed for the first time in 2020. For decades our drivers have had to adapt to a variety of different events on plenty of different surfaces, in all weather conditions.

“The BRC stars will have to certainly adapt as they take on the challenging dusty stage in their state-of-the-art rallying machines. Our drivers fight for tenths in the championship and will be giving it everything as they look to top the illustrious time sheet which normally houses WRC stars and legends of the sport. The BRC will travel to West Sussex for the first time in its history and we cannot wait to put on a show and entertain thousands of festival goers.”

The British Rally Championship will feature six rounds in six territories, with events across the UK in Wales, England, Northern Ireland and Scotland. The series will once again visit Belgium for the classic Ypres Rally as well as the popular staple in Irish Rallying, the West Cork Rally – successfully introduced into the series last year. 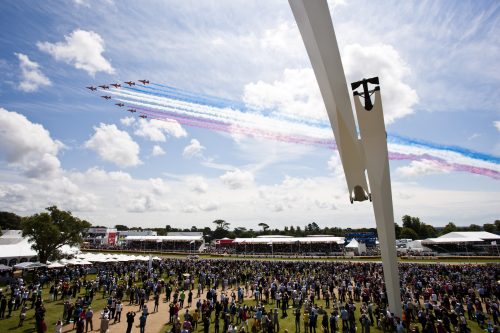