The Prestone MSA British Rally Championship is ready to burst back onto some of the world’s best rallying stages with another action-packed year of competition ahead following its highly successful reincarnation last year. The BRC is well-known for being the premier proving ground for young rallying talent, and further history is set to be made on the seven-round series in 2017.

2016 witnessed a stellar performance by Elfyn Evans in a DMACK-backed Ford Fiesta R5. The Welshman put on a dominant display to clinch the title on the Ulster Rally – 20 years after his father Gwyndaf lifted the same trophy on the same event. The 28-year-old’s success story fired him back into an FIA World Rally Championship seat and upon his return, the DMACK World Rally Team driver set fastest stage times on the Monte Carlo Rally to put him back amongst the world’s best.

“It feels great to be British Rally Champion, 2016 put the enjoyment back into rallying for me and I think the results came because of it,” explained Evans. “The BRC played an important part in getting me back into the WRC and being a part of the buzz and excitement was great. It was obviously a really important year for the British Rally Championship – a completely revamped series with new R5 cars – and it certainly didn’t disappoint. It was a really enjoyable year. We had a fair bit of success, so obviously I am very happy about that and it was really great to see the championship back in full swing and as strong as ever.”

Evans understands the importance of the BRC to both his career and the future of British rallying – views that are shared by M-Sport Managing Director and 1994 BRC Champion, Malcolm Wilson OBE.

“The British Rally Championship had always been a proving ground for up-and-coming talent, and it’s great to see the revitalised series getting back to its roots,” said Wilson. “It’s the place to be for any aspiring young driver who wants to make the step-up to international rallying.

“Attracting young talent with its mix of gravel and asphalt rallies, the British Rally Championship really does provide the perfect platform for those looking to develop their skills and make a name for themselves amongst the rallying elite.”

As well as Elfyn Evans, the BRC has helped to produce some of the current superstars in the world of rallying with Kris Meeke, Jari-Matti Latvala and multiple American Rally Champion David Higgins having all cut their teeth in the championship. Craig Breen, Citroen’s latest WRC recruit is a big believer that the BRC helped to shape his career.

“The BRC was a really crucial step in my career,” enthused Breen. “We started off in the Fiesta Trophy and then the S2000 car, and they were both fundamental steps in my career. The BRC is the proving ground for talent to go onto the international stage.

“The BRC was sadly missed in 2015 and it was great to see it back with a bang again last year. There are some proper, challenging events and it’s good to have it back with a high entry and loyal following. The competition is at a really strong level and it was good to mix it with the championship runners on the Circuit of Ireland and Rally Isle of Man last year.

“I love driving, I absolutely love what I do and I would love to come back and give more BRC rounds a go in the future. It would be nice to do something again.”

The next wave of talent is on its way with 2016 Junior BRC Champion Robert Duggan set to enter the Junior WRC, while Chris Ingram is gunning for Junior European Rally Championship glory with Opel in 2017.  Jon Armstrong, Gus Greensmith and Osian Pryce are leading the BRC charge in WRC2, the premier support category to the sport’s top level.

“The British championship has historically been a fantastic stepping stone for aspiring drivers aiming for the WRC, especially as it allows crews to recce and make their own pace notes on fantastic events and stages,” explained Higgins.

“When you have 20 R5 cars and so many in the other classes, it’s great for the championship. I have been watching closely and been excited by the turnaround. I was delighted to be a part of it on the Isle of Man, and the new format puts the BRC back on the map as one of the best championships in the world.”

One of the sport’s greatest ambassadors, 1976 and 1980 BRC Champion and 1981 World Rally Champion Ari Vatanen is also a big fan of the series.

“I can’t believe it is over 40 years ago since I first won it,” enthused Vatanen.  “I have incredible memories from competing in the British series. It has always seen visiting stars turn up on some events against the best of British. It is a mini world championship at times.

“The BRC helped to raise the game for Scandinavians and competition in Britain. I am really happy that the new team has put the BRC back to where it deserves to be – the best national rallying series in the world.”

The BRC is set to create even more history in 2017, as Britain’s premier rallying series welcomes its first overseas round in the championship’s 59-year history with a trip to Ypres in northern Belgium, marking the mid way point in the new calendar. The new season is set to be the most open in recent times. Who will be crowned champion and make more history come the end of the year? We don’t have to wait long to find out. 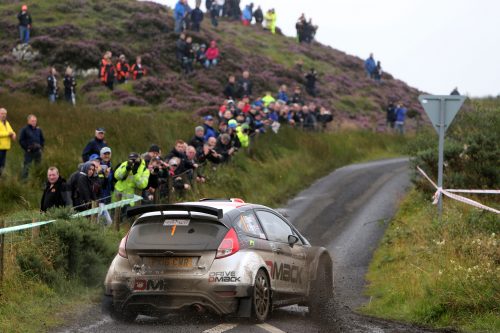