The final round of the MSA British Rally Championship got under way in spectacular fashion with a short one-mile blast along the promenade in the heart of the Isle of Man capital, Douglas. Taking the early advantage on the 138.com Rally Isle of Man was Citroen World Rally Team star Craig Breen and co-driver Scott Martin in their Citroen DS3 R5 –winning the spectator lined super special stage.

Newly crowned BRC champions Elfyn Evans and Craig Parry (Ford Fiesta R5) took a cautious approach to the first stage but soon hauled in non-registered Breen and Martin on the second stage to take the overnight lead of 12.3 seconds over the fellow Welsh pairing of Tom Cave and James Morgan (Fiesta R5). Breen and Martin came to woes with a sensor fault on the final stage of the evening forcing them to retire from the evenings proceedings.

Running third on the road and third on the results sheets is local hero Mark Higgins. The Manxman is not registered for BRC points which elevates Swedish star Fredrik Ahlin, BRC2 Champion Matt Edwards both driving Ford Fiesta R5’s and Desi Henry (Skoda Fabia R5) to round out the BRC top five.

Action resumes tomorrow with six stages running from early morning into deep darkness, testing the endurance of the teams on the second day of the rally. 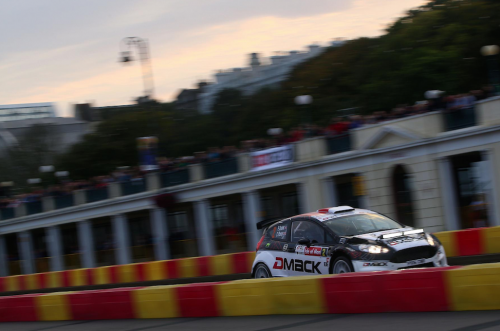