FIA Junior World Rally Championship star Tom Williams will return to the BRC at the wheel of a Ford Fiesta R5 as he makes the transition to four-wheel-drive – adding his name to a star-studded class of 2020.

Williams last appeared in the BRC on Rally Isle of Man in 2017 where he scored a Cadet Cup victory on the island event. Since then Williams spent two seasons in the Junior World series – claiming a career best finish of fourth on Rally Sweden last season. Now for 2020, Tom returns to Britain’s premier rally series in the search of gathering experience in a R5 machine.

“After Wales Rally GB last year we sat down and thought about what we could do and and what we wanted to gain. I wanted to make the switch to four-wheel-drive and needed to get as much mileage as possible without too much stress and the BRC was the logical choice.

“When I was last in the BRC in 2017 it helped me immensely with recce and pace note making. The big change this time will be the step from an R2 car to an R5 and how much quicker things happen, so my note making will be first thing to refine. I have Jamie Edwards in the car for the first round and he has a lot of experience and it’s nice to drag him out of his retirement to sit with me! I know the events well in the BRC and I have driven the Fiesta R5 on tests and at Goodwood so feel quite comfortable already.”

Williams is playing down his chances and believes the pressure is on his rivals as he aims to get the experience under the belt, and as the season goes on – he hopes to threaten the front-runners.

“The BRC has a good atmosphere to help me learn and the competition is red hot this year. I grew up watching the BRC and it will be quite special to step-up into the top class and drive on some great events. The Cambrian will be good to get some mileage on gravel but I am really looking forward to Clacton. It’s nice to change up calendars and have new fresh events and will be a level playing field for everyone so that will add abit of spice.” 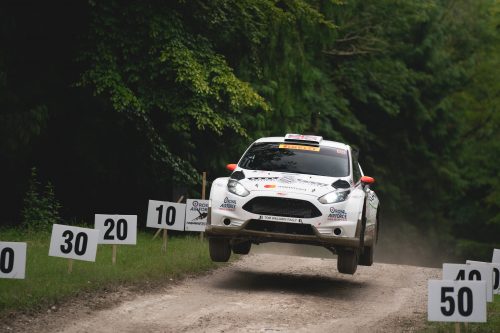