BRC ready for battle in the Scottish Borders

The Motorsport UK British Rally Championship heads to Duns this weekend [27-28 May], as the Beatson’s Building Supplies Jim Clark Rally makes a welcome return to the action-packed roster after seven years away from the Scottish Borders lanes.

In fact, the last time the UK’s premier rally series was blasting down the unforgivable Berwickshire closed roads, it was in the era which saw only two-wheel-drive cars eligible to compete for the prestigious title.

But now, a blistering array of top-flight BRC1 crews in a variety of Rally2, four-wheel-drive, turbocharged machinery will line up to do battle over the two-day event, as will a dynamic and impressive line-up of ultra-rapid Junior and Academy drivers, each aiming to take the spoils at the last asphalt round of the series until September.

Taking the opening round win, 2021 championship runners-up Osian Pryce and co-driver Noel O’Sullivan secured a thrilling victory in the Essex lanes, overhauling four-time BRC champion Keith Cronin in the final throws of the event and will wear the coveted number one on the doors of their Melvyn Evans Motorsport run Volkswagen Polo GTi.

Driving the Michelin shod machine for the second successive season, Pryce is in no mood to play second fiddle again and will be looking for another maximum point haul to keep his dream alive. But Cronin has form on the Clark. A previous winner of the rally in 2012, the Irishman knows what it takes to master the Borders lanes and will be charging as hard as he dares in the Hankook backed Volkswagen Polo GTi with Mikie Galvin on the notes.

But the BRC is not known for being predictable and any one of the front-runners could well take the spoils in Scotland. James Williams and Dai Roberts kicked off their first full BRC1 campaign in superb style in Clacton, taking their Hyundai i20 to a stellar podium spot after a progressively improving pace over the weekend. Going one or even two better this time around is a distinct possibility.

Ruari Bell and Max Freeman made a huge impression on the BRC leader board at round one, challenging Cronin for the lead before being forced into retirement with a damaged radiator. Their Pirelli-shod Skoda Fabia could well be suited perfectly to the bumpy tar in Berwickshire and a maiden BRC win is not far away.

Garry Pearson will be calling on all his local knowledge to right the wrongs of the opening round after ending his rally in a ditch. The Duns driver will be driving the roads just a few miles from his home but will still need to dig deep in his Ford Fiesta Rally2 to take it to the front of the pack. Dale Furniss returns to the co-driver’s seat and the pairing will understandably be playing their Joker for a potential points bonus.

Jason Pritchard and Phil Clarke endured a difficult season opener and will be looking to find some much-needed luck as they take their Polo GTi to the Jim Clark for the very first time. Pritchard has tackled the event previously, although he will need to draw from the distant memory banks as it was during his last BRC campaign back in 2011.

Elliott Payne is a self-professed gravel man but the nineteen-year-old proved his ability on any surface with fourth place on the sealed surface season opener in Essex. With Tom Woodburn in the co-driver’s seat, Payne was beaming after his closed road debut and that confidence could well net a good result this time around.

Instrumental in securing Melvyn Evans Motorsport the BRC Teams title in 2021, Meirion Evans makes his BRC1 debut at the Jim Clark Rally, driving a Polo GTi. Announced only this week, Evans and co-driver Jonathan Jackson have a blistering asphalt pace as proven during their Irish Tarmac campaign and could well disrupt the podium.

Clacton would prove a tough BRC baptism for Andy Davies, who was gaining confidence with every stage on his debut in the Fiesta. Along with co-driver Rob Fagg. Davies was climbing the leaderboard until a heavy crash put them out of the rally on the spot. Whilst the Ford won’t be ready for the Jim Clark, the team are hoping to utilise another steed for the event.

Equally as enthralling as the battle for the topflight BRC1 honours, the Junior British Rally Championship crews will also offer up some breath-taking action in the lanes.

It would be Norway’s Ola Nore Jr with British co-driver Jack Morton that took the spoils in round one but with the duo being forced to miss the Jim Clark, all eyes will be on 2021 JBRC runners up Eamonn Kelly and Conor Mohan as they play their Joker card this weekend.

Like many of the latest generation of BRC contenders, they will be making their Jim Clark Rally debut and will need to be on top form to keep their rivals at bay in their Ford Fiesta Rally4. Kyle White and Sean Topping briefly led in Clacton and showed signs of getting to grips with their all-new Peugeot 208 Rally4. Once bedded into the Scottish roads, they could well show their hand once again.

Ioan Lloyd and Sion Williams enjoyed an impressive Junior BRC debut run in their Peugeot 208 Rally4, taking fourth on their first-ever closed road asphalt event in Essex, but they will be chased hard by Johnnie Mullholland and Eoin Treacy and Academy Trophy leaders Kyle McBride and Liam McIntyre, both using Fiestas.

The National Rally Champion top spot was eventually decided on the final stages in Clacton as Craig Jones and Ian Taylor nailed the handling in their Ford Fiesta to overhaul leaders Mick O’Brien and Mark Glennerster in their Focus WRC, putting their Joker and bonus points nomination to effective use.

Jones will have new challenges on the horizon as the series welcomes back Alan Carmichael and Arthur Kierans in their Hyundai i20. The ultra-experience Ballymena driver finished runner up in the BRC National category in 2019 and fourth in 2021 so will undoubtedly be looking for that elusive title this time year. William Mains is joined by Emily Easton-Page this time around and will be aiming for another solid result in his rapid Vauxhall Nova.

In contrast to Clacton, the Jim Clark Rally offers vastly longer stages and Friday night kicks off with two runs across the infamous Longformacus test. At around twelve miles, and in darkness for the second pass, it could well shape the rally.

Saturday sees seven more stages for the BRC contenders with classics such as Westruther and Eccles bringing an air of nostalgia to the event. The Jim Clark Rally was often regarded as a flagship event in the BRC calendar, and we can be sure that it will not disappoint on its return. 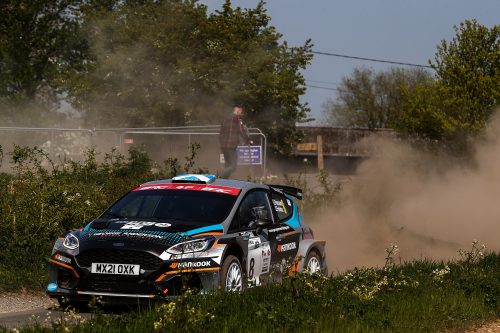