BRC on the World Stage

After an action-packed seven round series, MSA British Rally Championship crews took the plunge and tackled the legendary three-day Dayinsure Wales Rally GB (27-30 October). The final European round of the FIA World Rally Championship would see the BRC crews go head-to-head with some of the world’s best drivers on Wales’ finest stages.

Two BRC champions were present in Wales. DMACK Junior titleholders Rob Duggan and Gerard Conway were in action in their Vauxhall ADAM R2 driving under the Network Q banner. The Irish crew set a blistering pace on the opening day of the rally, running as high as 38th overall and first in the R2 category. Disaster was to strike the Vauxhall duo on stage seven when a high-speed crash put the Junior champions out of the event. With too much damage to the ADAM, the pair couldn’t rejoin under Rally2.

BRC5 Champions Tom Williams and Emma Morrison also suffered their fair share of problems. Williams, at 17-years-old was the youngest competitor on the event and was out to gain vital experience in his R2 specification Fiesta. On the final stage of the first day, a shaft and bottom arm came loose. Fixing the car, the crew ran out of time and had to retire. Running under Rally2 on Saturday, the pair worked their way through problems on the final two days to complete the event – finishing second in the R2 category at the finish in Llandudno.

2011 British Rally Champion David Bogie in his Skoda Fabia R5 reunited with regular co-driver Kevin Rae for a run in the WRC2 category. The Scottish pair showed top-ten form early on but clipped a rock on stage five. Limping the Fabia through the stages, Bogie had to retire on stage seven after hitting a tree. Undeterred, the CA1 Sport crew turned Bogie’s machine around to enter the event under Rally2. Matching the times of the works Skodas on the final two days, Bogie and Rae climbed the ranks to become the highest placed BRC crew on the World Championship event, chalking up 23rd overall and 10th in WRC2.

The highest placed BRC finisher went to James Morgan who was sitting next to Estonian Sander Parn in a DMACK-backed Ford Fiesta R5. The Welshman eventually finished 20th overall and with it the Nigel Harris Trophy for highest placed British co-driver.

Finishing just one place behind Bogie on the overall classification were Jamie Anderson and Ross Whittock in their Ford Fiesta R5. The English pairing were tackled their first WRC event and steadily built confidence, stage by stage to slide their way to 24th overall and third Non Priority driver home. The crew picked up a plethora of awards with Anderson taking home the best newcomer and best private entry while Whittock was awarded the Michael Park “Beef” Trophy for the highest placed British co-driver born after 1st January 1991. Fellow Fiesta R5 crew, Rhys Yates and Tom Woodburn suffered several punctures on the opening loop of stages, dropping the young pairing down the order. A spirited fight-back on the final two days elevated the duo up the order to finish in 32nd. What’s more, Yates took the Richard Burns Award for best placed British driver born after 1st January 1991.

Gus Greensmith stepped up to R5 machinery for the first time on the British WRC event. With new German co-driver Katrin Becker, the young-gun threw caution to the wind in shakedown to end up second quickest in WRC2. On the first competitive day of action, Greensmith put in a performance beyond his years to sit as high as sixth overall before ending the day in seventh. Retiring on day two due to Becker failing ill, Gus and Katrin returned for the final day in 34th overall, impressing on his four-wheel-drive debut.

Local heroes Osian Pryce and Dale Furniss had a brilliant 2016 coming into the Wales Rally GB. After claiming the National Rally Cup win on the Mid Wales Stages, the Welsh pair lifted the Drive DMACK Fiesta Trophy in Spain. They last drove an R5 on GB in 2014 and wanted to emulate that performance once again. Nestling into the top six in WRC2, Pryce and Furniss looked comfortable running with some of the best young drivers in the world. Power steering problems on day two before retirement on day three with radiator woes put paid to a promising run from one of Britain’s rising stars.

Fredrik Ahlin hoped all his bad luck would have been left on the Isle of Man. Having not finished a rally in Britain since his win on the Pirelli Carlisle, the Swedish driver wanted to show his raw speed on the world stage. New co-driver Andrew Roughead was calling the notes for Fast Freddie for the first time and Ahlin had to get used to English notes inside his Fiesta R5. The pair gelled instantly setting the fifth quickest time in WRC2 on a fog-lined Myherin. Boost failure and further mechanical gremlins halted the Anglo-Swedish pairing on the opening leg. On day two, Fredrik was quick out of the block once again but a crash in the afternoon put the Swedish star back to square one. Fantastic work by the CA1 Sport saw the Carlisle-based team rebuild the Fiesta to finish the event come Sunday.

ERC star Chris Ingram with Elliot Edmondson calling the notes finished third in the R2 category despite a roller coaster of a weekend while Spencer Wilkinson and Glyn Thomas recorded a well earned finish in the Subaru Impreza despite having to Rally2 on the final day after a ball-joint fault on the second day.

Thomas Preston and Carl Williamson were the crew to beat on the National Rally in the early stages before a day one retirement. Running under Super Rally in their Skoda Fabia R5, the pairing worked their way up the order to record 17th overall. Gee Atherton and co-driver Keaton Williams had a storming drive to win their class and chalk-up 15th overall, one place ahead of five-time BRC Champion Jimmy McRae. Lee Hastings was the final BRC runner across the finish ramp despite several problems throughout the event. The Scot showed great speed in his Impreza to take top ten stage times throughout the weekend. 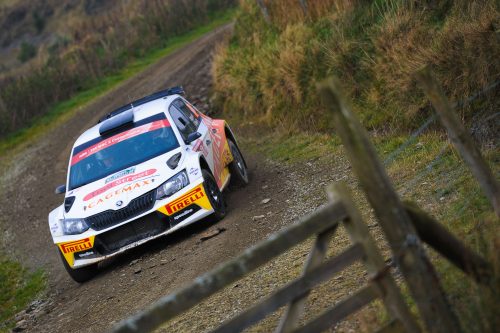