The British Rally Championship have lined-up a crack media squad for the upcoming season. Announced on the morning of Deadline Day, the new-look BRC team under the watchful eye of Media Manager Ben Buesnel will be covering every event, every turn and every plot twist throughout 2020. Matt Cotton and Bex Hinton will be joined by Adam Smith and Seb Scott for the forthcoming season.

After a successful introduction in 2019, Matt Cotton and Bex Hinton will return once again. The safe pair of hands from Cornwall will be reporting from the end of stages, regroups and passage controls across the British Isles, Ireland and Belgium this season. The Facebook LIVE coverage grew in popularity with teams, families and fans being able to get the reaction from all the BRC crews just moments after the action-packed blasts in the forests and asphalt lanes. This season, a full schedule for the LIVE coverage will be produced on the eve of every round – allowing you to plan your BRC fix during every rally.

“We are delighted to be returning to the British Rally Championship once again this season to host the stage end LIVE feeds,” said Matt Cotton. “The series proved last year that it is still home to some of the most exciting and unpredictable outcomes of any domestic championships and it’s an honour to be part of such an integral part of the British Rallying scene. Adding Seb and Adam to our dynamic team will give the BRC an awesome stance which I’m sure both competitors and fans alike will enjoy.”

Adam Smith is known to many in the rallying community for his dynamic videography. Smith first broke onto the British scene in 2016 when working for the DMACK BRC team. After a number of years in the globe-trotting series covering the WRC and Junior WRC, the BRC have struck a lucrative loan-deal to bring his services back to the Britain’s premier rallying series this season.

“I am delighted to be joining the BRC for the 2020 season,” enthused Smith. “It’s an exciting prospect to see what Seb (Scott) and I can do with the championship and I am looking forward to putting together some great content throughout the year.”

A man of few words… he lets his camerawork do the talking. He also lets his onscreen front-man Seb Scott fill the screen with enthusiasm and humour. Seb Scott has been around the sport for a number of years and joins the team sheet for the very first time in 2020. As well as the official drone operator for the series, Scott will also be wandering around the service park with the microphone capturing interviews, behind the scenes gossip as we get to know what makes the BRC characters tick.

“Well this is an honour,” declared Scott. “Having followed the BRC for a number of years I am pleased to join the presenting team for 2020. The championship has a good, fun social buzz about it currently and Adam and I are looking forward to joining the team and help bring more colour, fun and insight into the series’ channels. Expect to see plenty of dramatic action and slick shots from all six events – as well as a rather resplendent tash. You have been warned!”

The British Championship are also delighted to retain the services of Jakob Ebrey Photography – who will once again provide the stunning imagery for the championship.

The British Rally Championship will commence on the Visit Conwy Cambrian Rally on the 8 February. Entries for the first round close tomorrow (Saturday 25th January) at Midday. 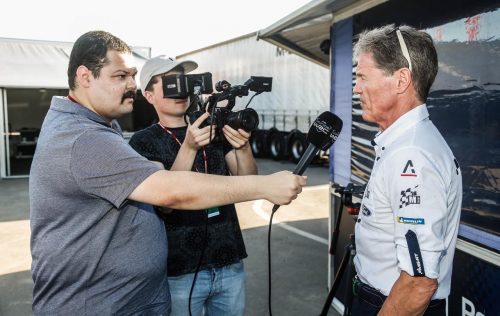