BRC is proud to present…

Colin Clark is one of the best known voices in the world of rallying having been the stage end reporter for the WRC’s Radio channel ‘WRC Live’ for many years. His enthusiastic and passionate style will anchor the coverage for both the half hour Channel 4 show and hour-long BT Sport transmission.

“The BRC is going to make great television this year,” enthused Clark. “We are going to have the best drivers in the best cars on some of the greatest stages in the world. The BRC will be the National series, with so many drivers able to win an event. Who isn’t excited about that?

“To have the confidence from major broadcasting companies such as Channel 4 and BT Sport is a big credit to the team behind the BRC. The package is exactly what’s needed to put the Championship back where it belongs. It is fantastic for the sport and I am really looking forward to being a part of it.”

Jon Desborough is familiar to many rally fans and no stranger to the two channels. Desborough presented Channel 4’s WRC coverage in the early 2000s and he is now the commentator for the WRC’s international feed that plays out on BT Sport and around the world. Jon will provide the audio backdrop to the exciting visual action as the BRC unfolds on screens around the country.

“What an explosive mixture the Mid Wales start list looks like being: Bogie, Cave, Evans, Thorburn, Vatanen and many others,” he said. “I wish I’d had this idea myself. There will be tears before bedtime for someone, but it looks like we’re going to have a great season.”

IMS Managing Director Ben Taylor is delighted with the broadcast line-up for the revitalised series. “We have worked hard to bring together the best possible TV package for the BRC and to have Colin and Jon as part of the team is another important piece of the jigsaw. Both are well known within rallying and bring credibility to the coverage, while their infectious enthusiasm will add huge value to the programme content and make it an entertaining offering for the casual viewer.”

Each event will be transmitted on the weekend after the rally, except for the Pirelli Carlisle Rally and Nicky Grist Stages which will be broadcast two weeks after the action takes place. Precise transmission schedules will be announced in due course. 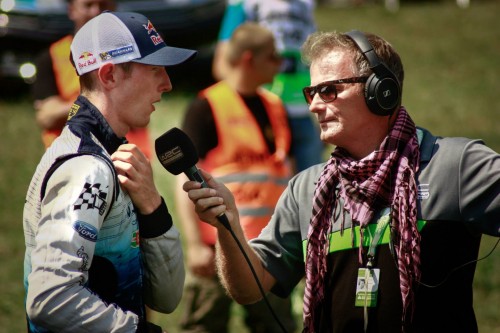