The 2017 Prestone MSA British Rally Championship campaign is one of the most eagerly-anticipated in the series’ 59-year history. Britain’s premier rallying series is ready to explode onto the scene for yet another entertaining season. Round one gets underway in Jedburgh, Scotland with the Brick & Steel Border Counties Rally on 17/18 March.

The action-packed British Rally Championship takes in seven rounds across the British Isles, with the exciting inclusion of Ypres Rally in Belgium offering a demanding mid-season challenge and the first overseas outing for the BRC. All seven events will be beamed into homes around Europe with Channel 4, BT Sport and Motorsport TV all showcasing the best of the action with extensive highlights being transmitted after every weekend.

Last year’s champion, Elfyn Evans graduated to the FIA World Rally Championship with the DMACK World Rally Team. The WRC star’s absence paves the way for a new champion to be crowned in 2017 – and there is a whole host of drivers all with the gloves off, ready to fight for one of rallying’s most coveted titles.

Battle Royale in the top flight

Leading the charge in BRC1 will be 2016 runners-up Tom Cave/James Morgan in a Dom Buckley Motorsport-prepared Ford Fiesta R5. The Welsh pairing have signaled their intent and expect to be battling at the sharp end in Scotland this weekend.

Triple BRC champion Keith Cronin, with Mikie Galvin alongside made a closed-season move from a Citroen DS3 R5 to a Fiesta R5. The Irishman will be joined in the M-Sport fold by Scottish driver Alex Laffey, who has Welshman Dai Roberts calling the notes. These crews will lead the attack for the Cumbrian firm and Ford, with the Blue Oval returning to the BRC as a manufacturer once again.

David Bogie/Kevin Rae were champions in 2011 and will be eager to get their names back on the historic trophy in their Skoda Fabia R5. The homegrown heroes will spearhead the CA1 Sport trident as the Scottish pair are joined by the ever-improving Jamie Anderson/Ross Whittock (Fiesta R5) and Fredrik Ahlin. The Swedish sensation notched up his first win on the Pirelli International Rally last year and will be eager to add to his tally further with his new Fabia R5 and new co-driver Torstein Eriksen.

Jonny Greer leads the Irish charge in the BRC this year in his Citroen DS3 R5, with Kirsty Riddick on the notes. The Ulsterman rounded out the top three in the standings last year and will be hoping to be in the hunt once again. Desi Henry/Liam Moynihan are targeting wins this season in their Fabia R5, as are Marty McCormack/David Moynihan, who step-up from a S2000 Fabia to a full-bore Fabia R5.

One of the biggest announcements in the build-up to the first round was the return of Osian Pryce and Dale Furniss in a Fiesta R5. The young Welshman is one of Britain’s brightest rallying prospects and will be dovetailing his British campaign with outings in the WRC2 category in the World Championship.

Matt Edwards/Darren Garrod were the first crew to register in their Swift Rally Team Fiesta R5. Last year’s BRC2 champion steps up to the BRC1 category for a full campaign after an impressive showing in the car on the final two rounds last season.

Young gun Rhys Yates is another driver who showed flashes of brilliance in 2016. The Englishman has the experienced Carl Williamson navigating in the striking Fiesta R5. Scottish star Euan Thorburn is out to showcase his worth in his new Fiesta R5. With Paul Beaton co-driving, Thorburn can never be discounted from the top of the timesheets on home soil.

A new year and a new crop of hungry, young rallying talents will travel to Scotland, all eager to prove their worth in the Junior series. With a £30,000 prize fund on offer to the overall champion and an open tyre formula, competition will be fiercer than ever on the stages.

The Solberg name graces the BRC for the first time with Oscar Solberg, son of World Rally driver Henning and nephew of 2003 World Rally Champion Petter, set to join the action. The Norwegian will be using the British stages to hone his rallying skills with Swede Patrik Barth reading his pacenotes. The Ford Fiesta R2T driver will be joined at MH Motorsport by Celtic two-wheel-drive champions Callum Devine/Keith Moriarty in a sister Fiesta R2T. Another Ford Fiesta R2T will be in the hands of James Williams/Phil Hall, who will lead the Junior BRC attack for Spencer Sport.

Peugeot are well-represented in the Junior category this year. Irish crew Marty Gallagher/Dean O’ Sullivan contested BRC4 last year and are hoping their experience in the car will put them at the front of the field. From Wales, Meirion Evans/Jonathan Jackson and Cameron Davies/Caron Tomlinson will be hoping for a strong opening round to their campaign, while William Creighton/Liam Regan will be aiming for a solid result before their preferred Tarmac surface later in the season. The final 208 R2 driver is Dean Raftery, a man who shone on his previous exploits in the BRC back in 2014. The Irish driver is one of the dark horses in the Junior category, with Tom Woodburn alongside.

Josh McErlean/Damien Duffin bring a Citroen C2 R2 to the party, making it four marques in the Junior BRC. The British 1000 rally champions will graduate into the BRC and will hope to put the cat amongst the pigeons from the word go.

New for 2017 is the exciting formation of the Cadet Cup, home to the Ford Fiesta National, Opel ADAM Cup and older generation Ford Fiesta R2.

The first to signal their intent was Harper Adams University, with an enthusiastic group of students building their Ford Fiesta National from scratch. Piloting the new machine will be James McDiarmid and Max Haines Messenger.

Challenging the University will be a fleet of MH Motorsport-prepared Ford Fiesta R2s for Alex Waterman/Harry Thomas, Josh Cornwell/Richard Bliss and Nabila Tejpar/Charley Sayer-Payne. Richard Burns’ godson, Tom Williams will also be behind the wheel of a Fiesta R2, with Bryan Hull on the notes. Fergus Barlow will be counting the Border Counties as a home round as the man from the Isle of Mull hopes to mix it with the mainlanders.

BRC brings variety and a World Champion to Scotland

Downhill Mountain Bike World Champion, Gee Atherton will contest a full campaign in the BRC this year alongside Keaton Williams. The two-wheel legend will be gunning for BRC4 class honours, as he hopes to add another award to his impressive trophy cabinet. Out to stop him will be father and son David and Matthew White, who also join the BRC for the first time in a similar Ford Fiesta R2.

Donnie Macdonald and Andrew Falconer finished second in the National Rally Cup in 2016 and will be keen to go one better 12 months on, as the Scottish duo hope to get their season off to a flying start in their new Ford Fiesta R5. John Morrison and Peter Carstairs will be out to entertain in their Mitsubishi Evo 9, while Spencer Wilkinson and Glyn Thomas bring the iconic Subaru Impreza to the BRC Production Cup. 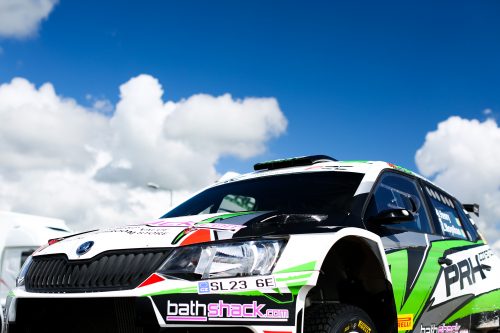