After a scintillating battle in the Welsh forests of last month’s Nicky Grist Stages, the Motorsport UK British Rally Championship makes the trip to north east Scotland for round three of series, The Grampian Forest Rally (14 August).

The Banchory based event boasts some of the finest stages in Scotland and marks the first time Britain’s premier rally championship has headed to the area since the 1980’s. Just 15 miles west of Aberdeen, the Grampian will provide crews with action-packed yet flowing gravel tests in the Durris, Fetteresso and Drumtochty forests.

None of the front-running BRC contenders have sampled the popular gravel stages before and the addition of a new event to the BRC roster is likely to unearth even more unpredictability across the BRC leaderboards. With different winners from the two events in all categories so far this season, another new name on the top step of the podium is very much a possibility.

The 2021 season has already provided intensely close competition with the asphalt of Oulton Park opening proceedings at the Neil Howard Stages providing the winning margin of just one second. The `Grist` marked the switch to gravel and was equally as thrilling, this time just a six second margin separated the leaders. With the Kincardineshire stages an unknown endeavour for the title protagonists, watch out for more fireworks than normal as crews battle for supremacy in Scotland.

Double BRC champion Matt Edwards will start the event as the number one seed, fresh from round two victory in his Pirelli-shod Volkswagen Polo GTi. With Darren Garrod on the notes, the all-Welsh pairing proved their adaptability to new machinery, taking their Melvyn Evans Motorsport run Polo to a convincing win over BRC returnee Tom Cave at the Nicky Grist.

It was enough to vault him to the top of the points standings and Edwards believes the Grampian offers up a great opportunity to capitalise on his recent win.

“It certainly doesn’t phase me that I’ve never competed on those stages before,” says Edwards.

“I always tend to go `OK` in new places. I mean, I did ok in Ypres [second BRC crew and top ten on Ypres Rally debut in 2018] and it tends to be a great leveller so I`m happy with that. Notes will be critical as normal, as will the pre-event preparation which I`ve been heavily invested in as always.”

“The stages are fast and flowing with plenty of medium-speed corners, not too many slower sections and the surface looks great. We are only two events in so there is no point in being too safe, but we need to manage risks. I`m looking forward to it. It looks right up my street”.

M-Sport’s Rhys Yates will be looking to get his season back on track after finishing outside of the podium spots in Wales. The Michelin-backed Ford Fiesta Rally2 ace couldn’t quite match the Cave/Edwards battle on home turf but will be hoping that a clean sheet in Scotland will bring him back on form. Yates lies just three points shy of Edwards and a good score will take him and co-driver James Morgan, well into the thick of a title chase.

Two third-place finishes this season have given Osian Pryce a solid start to his year. Another newcomer to the Volkswagen Polo GTi, Pryce has matched team-mate Edwards on times on many occasions and could well stand at the top step of the podium this weekend. Irishman Noel O’Sullivan will guide him on the notes.

In a welcome return to the BRC, four-time title holder Keith Cronin has embarked on a gravel-led campaign in a Fiesta Rally2 and took seventh spot in Wales. Cronin and co-driver Mikie Galvin quickly got to grips with their new Hankook tyres and could well challenge the front runners as the Irishmen acclimatise to the pace of the BRC regulars.

Matthew Wilson was another name to throw his hat into the ring for the first time in many years at the Nicky Grist, driving an M-Sport Fiesta Rally2 for the Cockermouth squad. He will be joined by co-driver Elliott Edmondson in Scotland and will be aiming to help M-Sport close in on the 17-point gap to the Melvyn Evans Motorsport duo in the British Rally Championship for Teams race.

Rounding out the top ten, James Wilson has his sights set firmly on a hard reset of his season. Poor seeding and a time penalty at the Nicky Grist Stages means on paper his season has not been favourable. But with the experienced Arthur Kierans on the notes, the duo’s times have impressed in their Hyundai i20 and it could well be a turning point for their championship.

Round one winners Sam Moffett and Keith Moriarty struggled to catch the Volkswagen’s in Wales, but could well fight back in Scotland and they will be eager to hold onto third in the championship in their Fiesta Rally2.

Cathan McCourt is a late registration with Brian Hoy in the co-drivers seat having recently contested selected rounds of the FIA European Rally Championship and also drives a Fiesta Rally2, whilst Seb Perez/Gary McElhinney and Joseph McGonigle/Ciaran Geaney both sit inside the top twenty in similar machinery.

MOTORSPORT UK NATIONAL RALLY TITLE
Garry Pearson heads-up the Motorsport UK National Rally Title charge and will exchange his Mitsubishi Evo IX for a Skoda Fabia R5 on what is arguably his home BRC event. Pearson has the most experience of the stages in Kincardineshire and after an impressive run at a non-championship Scottish Rally last month, will fight for maximum National points. Pearson and co-driver Niall Burns will not take part in recce to enable them to also score Scottish Rally Championship points, but that’s unlikely to impact the experienced Pearson’s times.

Elliot Payne teams up with Dale Bowen for the first time this season and is fresh from a National victory at the Nicky Grist. An opening-round zero score means Payne is on the back foot in his Fiesta but has shown he has the pace to mix with far more experienced competitors.

Stephen Petch and Michael Wilkinson are at the top of the standings heading into round three but have yet to win a round in their Fiesta WRC. Jason Black and Karl Egan impressed on their gravel debut behind the wheel of their spectacular rear-wheel-drive Toyota Starlet and head to Scotland to gain more valuable miles. Alan Carmichael and Claire Williams are hoping for a less dusty run in Scotland after running behind slower cars in Wales.

JUNIOR BRITISH RALLY CHAMPIONSHIP
Competition in the Junior BRC is always impressive and with contenders vying for a WRC prize drive for the champion, expect more of the same in Scotland.

With round one winner William Creighton tackling the Junior WRC this weekend, it’s round two winners Ruairi Bell and Gareth Parry who lead the ultra-competitive contingent away in their Ford Fiesta Rally4. Bell suffered a nightmare season opener so will be doing everything in his power to continue an impressive pace in Wales  and will nominate the event as his Joker bonus points round to capitalise on Creighton’s absence.

It’s fair to say Kyle White and Sean Topping are doing some giant-killing in the Junior BRC this year, taking their older generation Peugeot 208 to the top of the standings after two rounds and mixing with the more powerful Rally4 category cars in the process. They will need to work hard to keep them at bay, however, with Scotsman Finlay Retson in close pursuit.

Retson has the most experience of the Grampian stages from all of the Junior BRC group and could well secure his maiden victory on home turf. Regular co-driver Rhys Stoneman will call the notes in the Fiesta Rally4 and a win here could see him move into the series lead.

David Kelly and Dean O`Sullivan have had a nightmare of a season so far and will be looking to take their first points haul of the season in Scotland. The pace has been there all year, but reliability has caused several issues for the Fiesta Rally4 ace.

In contrast, Eamonn Kelly and Conor Mohan have impressed on both rounds this season and returned a stellar performance on only their second ever gravel rally at the Nicky Grist.

“I think the Grampian will actually level the playing field up a bit,” says Kelly.

“Pacenotes will be key on that rally for sure as it seems a lot more technical than the Grist. I`m still learning gravel but I’m really enjoying it. Conor and I are putting in a lot of preparation for the rallies so it’s really rewarding to see us setting fastest times on a surface I`m unfamiliar on. I need to concentrate on getting faster out the blocks and once I’ve done that, I don’t think there is any reason why we are not challenging for the win”.

Brian Brady/Eamonn Creedon were towards the front of the Junior BRC battle in Wales before gearbox dramas halted progress and Eddie Lewis/Dom Adams will also look to find their form on the largely unknown stages.

Johnnie Mulholland/Calum Maguire took the top spot in the Academy Trophy at the season opener but Fraser Anderson/Jack Bowen took the spoils on the gravel to draw level in the championship standings. Aoife Raftery/Dylan Doonan could well move into third in the points tables after the weekend’s stages.

Six stages and 44 stage miles lie ahead for the BRC crews. Sadly due to restrictions in place, spectators are not permitted to event. However, live coverage online and extensive social media updates will bring all the news and gossip from the rally will be broadcast across the BRC social channels. 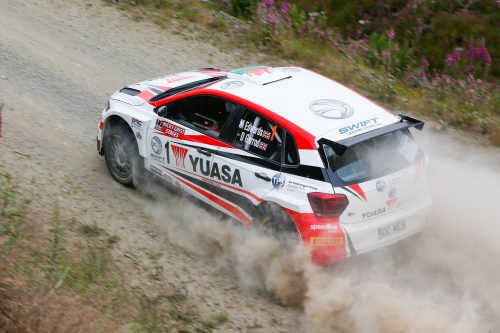 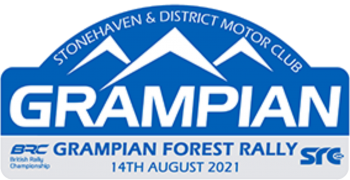