BRC gears up for gravel at the Grist

The Motorsport UK British Rally Championship makes its first foray onto gravel this season as the Nicky Grist Stages [9 July] offers up a scintillating mix of world-class forest tests for the series contenders.

The mid-Wales gravel stages are steeped in history, with iconic battles of the World Rally Championship elite played out on its daunting and unforgiving forest and moorland tracks over the decades. And now, eight stages and 44 miles of action will be on offer to the BRC contenders in a compact but action-packed day of rallying, from the Builth Wells town centre base.

Led by the BRC1 crews in a wide variety of Rally2 machinery, a sensational 160-car entry will line up to do battle, including progressive Junior and Academy drivers, each aiming to take the spoils on the first surface change of the seven-round season.

Two back-to-back asphalt events kicked off the 2022 campaign with Essex hosting the opener at the Corbeau Seats Rally Tendring & Clacton. The first visit to the region for the BRC saw a tantalising fight for the opening round spoils, with Osian Pryce and Noel O’ Sullivan claiming victory in the final throws of the event in their Michelin-shod Volkswagen Polo GTi.

But round two saw the return of a four-time British champion to the top step of the podium, as Irishman Keith Cronin was a tour-de-force at the Beatson’s Building Supplies Jim Clark Rally in May, blasting his Pirelli-backed Polo GTi to a popular victory, his and co-driver Mikie Galvin’s first BRC win since 2017.

With the opening two rounds on a sealed surface, Wales welcomes the gravel, and it will be BRC points leader Cronin who leads the crews away on Saturday morning. A non-championship forest event win at home in Ireland has set up him for the prospect, but he is well aware of the challenge he faces to stay ahead of the chasing pack and retain the BRC lead.

Pryce took a podium last season at the Grist and returns in the Melvyn Evans Motorsport run Polo for another shot at glory. A zero score at round two puts him on the back foot but with renewed fire in his belly and excellent experience over the stages, watch out for an on-form Welshman on home soil. Pryce also makes his 100th rally start, running 100 on the doors to mark the occasion.

Mr Consistent, James Williams has ticked almost every box so far on his debut full BRC1 season. Sensational performances in his Hyundai i20 see him sit comfortably in second in the championship and is arguably inches away from a first BRC victory. With Dai Roberts in the co-driver’s seat, the duo will be balancing their quest for points with that desire for the elusive win.

Elliot Payne has been one to watch throughout the BRC this season and is likely to turn as many heads as his Fiesta Rally2’s livery at the weekend. With Patrick Walsh on the notes, Payne is perhaps more at home on gravel and with many forest event wins under his belt already, don’t be surprised if Payne takes his first BRC podium or better.

But the shift onto a loose surface will likely throw up some surprises. Ruairi Bell/Max Freeman have proved their pace on asphalt but haven’t converted that to results thanks to a run of misfortune, but could get their Skoda Fabia towards the podium this time around. A sign of their confidence comes with their Joker nomination being used at the weekend, a win gaining a potential five bonus points.

Garry Pearson/Dale Furniss will be firing their Hankook-shod Fiesta Rally2 down the mid-Wales Forest stages for the first time, as will Jason Pritchard/Phil Clarke in their Volkswagen Polo GTi. Pearson will be aiming to capitalise on a Jim Clark Rally podium and last weekends non-championship McRae Rally Challenge win, whilst Pritchard recently enjoyed a gravel baptism in the Polo with victory at a warm-up rally sprint.

The Grist marks a welcome return for Andy Davies who has rebuilt his Ford Fiesta after a sizeable shunt in Essex and will be joined by Michael Gilbey on the notes, Davies being forced to skip the Jim Clark whilst the car was repaired.

Niall McCullagh/Martin Brady join the BRC top-flight for the first time, piloting a Fiesta Rally2. McCullagh has an impressive back catalogue of results under his belt and moved into a Rally2 in 2021. Whilst he has never competed on the Welsh gravel before, the Northern Irishman is well versed in Ireland’s forests and could well impress on his BRC debut.

National Rally Champion
The fight for the National Rally Champion title has seen two winners from two rounds, Craig Jones/Ian Taylor taking the Essex win on their BRC debut and 2019 series runner-up Alan Carmichael/Arthur Kierans securing the Jim Clark spoils. That battle will resume on the gravel but sees Carmichael’s years of loose surface experience give him the upper hand in the Hyundai i20 whilst Jones admits to not being on gravel in four years and will use his usual Fiesta 4X4.

William Mains is joined by Pete Pennah in the rebuilt Nova and will be aiming for a solid result after a heavy off on the Jim Clark.

Junior British Rally Championship
The Junior British Rally Championship crews will undoubtedly be just as entertaining as the BRC1 contenders on gravel, with last year’s runners-up Eamonn Kelly/Conor Mohan enjoying a 15-point lead in the championship after their Jim Clark victory. But they will be chased hard by Peugeot 208 Rally4 crews Kyle White/Sean Topping and Ioan Lloyd/Sion Williams.

Johnnie Mulholland/Eoin Treacy will be aiming for another podium in their Ford Fiesta Rally4 whilst Kyle Mcbride is joined by Darren Curren and will be hoping for a cleaner run on the gravel after a testing two rounds in the Academy Trophy.

A new name on the Junior BRC entry list is perhaps one of the most famous names in the sport, McRae. Max, co-driven by Macartan Kierans will make his championship debut in Wales and is the nephew of the legendary Colin McRae and son of 1995 champion Alister. He will drive a Fiesta Rally4 on his first gravel event in the UK, making the trip from his home in Australia.

It’s perhaps too early in the season to start making predictions in any BRC category, but one thing is for sure, the British Rally Championship pace will be sensational on the stages, and it will be a battle you won’t want to miss. 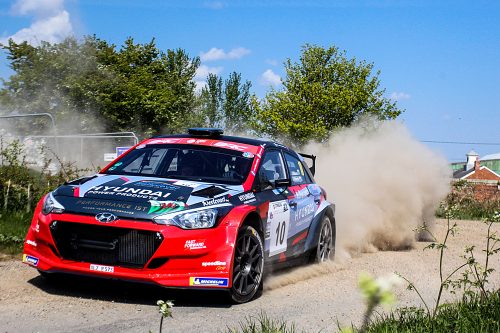