The Motorsport UK British Rally Championship will make a return to the iconic Dalby forest for the first time since 2013, as the Trackrod Rally Yorkshire [24-25 September] hosts round four of Britain’s premier rally series.

With stages draped in history from across the decades, the super-fast Yorkshire forests will provide the longest gravel encounter of the season, with 56 hard fought miles lying in wait for the British Championship protagonists.

And the challenge gets tougher still for the top-shelf competitors, as the well-known Dalby complex is set to host a spectacular 11-mile blast under the cover of darkness on Friday night to open proceedings.

The battle for supremacy on the six-test event will be as intense as ever, with this year’s BRC title fight thrown wide open as the championship steps over the mid-point of the season. From the seven rounds in store this season, the BRC has ticked off three so far and has seen a different winner standing on the top step of the podium on each event.

Leading the championship charge is M-Sport pilot Rhys Yates. With James Morgan in the co-drivers seat, Yates has yet to win a round of the BRC in his established career, but consistency behind the wheel of his Michelin-shod Ford Fiesta Rally2 this season has seen him take a slender one-point lead heading to the English forests.

“It’s great to get some solid points on the board this year,” says Yates.

“But I really must stop just being ‘Mr Consistent’”.

“I’ll be the first to admit we have been a little off the pace this season and have had our fair share of the luck not being on our side, but I need to up my game and get my first BRC win. That’s certainly the plan in Yorkshire”.

Friday night’s opener will add a unique dimension to the rally, but the championship leader isn’t fazed by the prospect.

“We all love a stage in the dark, don’t we? I haven’t actually done one for quite a while now so it will be great to get back into it and I`m well up for that to be honest. It could throw up some surprises I`d say. Essentially the game plan is maximum attack; the fight is on and I want my first win”.

But Yates will have a gaggle of championship challengers aiming to unseat him from the top of the standings by Saturday night and leading that battle will be Matt Edwards and Darren Garrod at number one seeds.

Edwards, a double British champion, will aim to put the heartache of his last-minute Grampian Forest Stages retirement out of his mind and bring his Melvyn Evans Motorsport Volkswagen Polo GTi back into play.

The Pirelli-backed machine could well be the perfect weapon of choice for the super-fast Yorkshire tests, but Edwards’ previous experience on these stages in historic machinery could also be a distinct advantage.

Welshman Osian Pryce is Yates’ closest challenger and also has the honour of winning the Trackrod on its last BRC encounter in 2013. Then driving a Citroen DS3, he will undoubtedly call on that experience of the forests to ensure he continues his momentum this season. Guided by Noel O’ Sullivan, Pryce has taken his Melvyn Evans Polo GTi to a podium spot on every round in 2021, although a win has so far eluded him.

Matthew Wilson made an impressive comeback to the series this year, storming to his first BRC victory since 2005 behind the wheel of an M-Sport Ford Fiesta Rally2 at the Grampian. 16 years ago, that win came on this event, so expect Wilson and co-driver Stuart Loudon to be a contender for a repeat performance.

Four-time BRC champion Keith Cronin is another to make comeback to the series this season. Driving a Hankook backed Ford Fiesta Rally2, he and co-driver Mickie Galvin have built their pace gradually throughout their return to take a season-best fourth in Scotland on only Cronin’s second event behind the wheel since 2018. The duo will undoubtedly be looking to clinch a podium on the stages where Cronin won in 2009.

Ollie Mellors and Max Freeman make a welcome return to the BRC after a brutal crash on the Nicky Grist Stages destroyed their Proton Iriz. A mammoth effort by the Mellors Elliot Motorsport team have seen a brand new car built for the remainder of the season and with Mellors a previous winner of the event in 2019, this could well see a return to form for the Bakewell squad.

James Wilson scored his best result of the season at the Grampian, with eighth place in Scotland. Driving his Hyundai i20, Wilson and co-driver Arthur Kierans have set some impressive stage times over the course of their 2021 campaign, but suffered with misfortune which has hampered a decent points score. An outing the weekend before at the Bushwacker Rally in Northern Ireland will mean the Armagh man should be well-focused for the Yorkshire tests.

Seb Perez and Gary McElhinney have been getting to grips with their M-Sport Ford Fiesta Rally2 this season and gaining experience of the BRC along the way, whilst Garry Jennings and Rory Kennedy have been smiling their way through their BRC return, despite facing the latest generation Rally2 machinery in their older specification Ford Fiesta.  Fellow class NRC7 contender Ashley Dickson heads up the Dickson Brothers Motorsport entry.

Junior British Rally Championship
Anything the BRC top-flight can do, the Junior contenders can do too. Three rounds – three different winners; and with a drive in the World Rally Championship in a Hyundai Motorsport Customer Racing i20 N Rally2 up for grabs, it’s no wonder the battle for the title is as intense as it’s ever been.

Leading the rapid contingent away are Junior WRC aces William Creighton and Liam Regan who took the first-round honours in their Ford Fiesta Rally4. But with a zero score in Wales and skipping the Grampian, they will have it all to do in Yorkshire if they are to catch up with their Junior rivals.

Ruari Bell and Gareth Parry took a maiden Junior BRC win in Wales before retiring their Fiesta Rally4 with mechanical issues in Scotland, meaning they are another crew searching for a maximum points haul.

Meanwhile, Irishmen Eamonn Kelly and Conor Mohan have been building their pace and experience throughout the season, taking a podium place on every round before securing an impressive maiden victory at the Grampian, vaulting into the lead of the championship on only Kelly’s third-ever gravel event.

Newcomers Kyle White and Sean Topping have arguably produced the most impressive performance of the season, taking their older generation Peugeot 208 to second and fourth spot to briefly lead the challenge, before retiring on the Grampian.

Finlay Retson and Rhys Stoneman are Kelly’s closest points challenger in the Junior BRC standings and have enjoyed a consistent season in their Fiesta Rally4; second place in Wales is a highlight so far. Like many Juniors, this weekend will mark the first foray into the Yorkshire forests for Retson and the level playing field could see Retson’ s first Junior BRC win.

Brian Brady and Eamonn Creedon have also enjoyed a solid start to their season with third in Scotland a sign of their increase in pace, but they will have to work hard to catch Kelly who sits 17 points ahead going into the Trackrod Rally Yorkshire.

David Kelly/Dean O’ Sullivan and Eddie Lewis/Dom Adams are all likely to challenge towards the front during the weekend’s super-fast forest tests in their Ford Fiesta Rally4’s.

In the battle for the Academy Trophy, Johnnie Mulholland and Calum Maguire have scooped wins at Oulton Park and the Grampian, whilst closest challengers Fraser Anderson and Jack Bowen clawed one back with a convincing win at the Nicky Grist, ensuring the fight for the title remains an unpredictable affair.

It was Thomas Preston and Carl Williamson who took the top spot at Oulton Park in their Fiesta WRC before Elliot Payne and Cammy Fair took a maiden category victory on the second round of the series in Wales. Garry Pearson and Niall Burns made a switch to a Skoda Fabia on the Grampian which proved to be pivotal to their title charge, scooping a convincing win in a staggering run of form of late.

Both Payne and Pearson sit just nine-point shy of leaders Stephen Petch and Michael Wilkinson who have enjoyed three podium results so far this season in their Fiesta WRC.

The Trackrod Rally Yorkshire gets underway on Friday [24 September] at 19:00 from a seafront start at Filey before a daunting Dalby test under the cover of darkness. Five more stages lie in wait on Saturday for the bumper 180-car entry, before returning to the Filey finish celebrations later that afternoon. 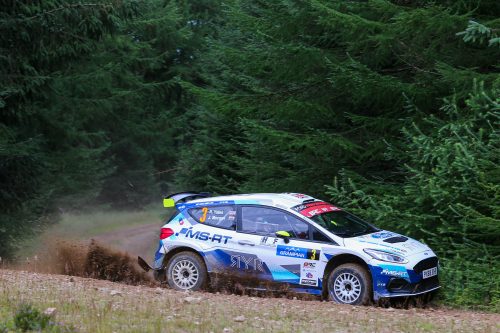