At just 21-years-old, Bird is already a seasoned rallying front-runner with victories on both asphalt and gravel surfaces in the UK behind the wheel of a Focus WRC. Dovetailing his Motorsport News Circuit Rally Championship campaign with a Word GT assault, Bird will now add the BRC to his list of registrations for the year ahead, along with regular co-driver Jack Morton.

“The racing and the rallying complement each other to be honest so its really not an issue to change from the circuits to the stages,” says Bird.

“I love both for very different reasons but seat time, no matter in what car, is really important and it keeps me on my toes. As long as you’re driving, it keeps you sharp and ready for the next event so it’s a real asset to be busy in this sport”.

The young pilot has a whopping 10 rally wins to his name, mostly centering around the MSN series but two wins on the gravel at Greystoke prove his pace is not just limited to a sealed surface. However, Bird’s experience in Rally2 machinery totals just one event, and although he took second place to BRC front-runner Rhys Yates on his new generation debut, Bird believes the BRC is one of the toughest challenges yet.

“The Focus WRC was being rebuilt so we took the chance to get into a Rally2 for Snetterton a few weeks back. I was really happy with how I adapted to the car and to be able to beat the likes of Rhys was a great start. It will be good to take another step forward at Oulton Park [round one of the BRC] but the BRC entry list is insane.

“We will be taking one rally at a time due to my GT commitments and it’s difficult to say what the season will hold pace-wise. I don’t have much pace note-making experience either so I`ll still be learning throughout the year, but I’m excited to see how we get on”. 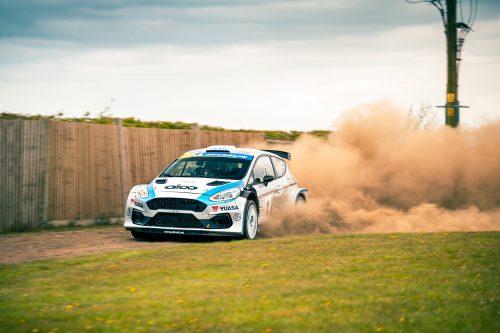