Oldcastle driver, Brian Brady has registered for the 2021 Junior British Rally Championship. The Meath man will take to the stages behind the wheel of his M-Sport Fiesta Rally 4.

Brady has his eyes on a major prize, as the winner of the 2021 Junior British Rally Championship will be offered an opportunity and support from the BRC to contest a round of the FIA World Rally Championship, behind the wheel of the latest generation Hyundai Motorsport Customer Racing i20 N Rally2 car in 2022.

The inaugural Motorsport Ireland Junior Rally Series Champion, who contested the opening round of the 2020 Junior BRC before the COVID pandemic halted the series, will kick off his campaign at the opening round of 2021, the Neil Howard Stages, which takes place around Oulton Park Race Circuit at the end of May.

“I had registered for the British Championship last year, but unfortunately, it was cancelled before we got to show what we were capable of, fingers crossed we will give it our best shot this year” says Brady.

“I’m hoping for good results on the tarmac rounds as that is my preferred surface. We had a couple of good results in the Irish Forestry Championships on my maiden attempt at the series so hopefully we can carry that positivity forward on to the loose surface events”.

Brady will continue his partnership with fellow Rally Academy member, Co-Driver Eamonn Creedon, from Inchigeelagh, Co. Cork. The team gelled well together last year and have embraced the support structure from the Academy during the lockdown and are ready to undertake the challenge that lies ahead.

The Junior British Rally Championship will be played out across seven rounds, visiting England, Scotland, Wales and Northern Ireland, with three asphalt and four gravel events making up the thrilling 2021 BRC season.

With the help of Michelin tyres, Brady and Creedon will be on the start line in their M-Sport Fiesta Rally 4 on May 31st in the UK’s most picturesque race circuit, Oulton Park.

Any support is always welcome for the Motorsport Ireland Rally Academy pairing, but thanks to continued assistance from Brian’s sponsors, who have made it possible for him to compete in the championship; LA Utilities, Fire Protection Ireland, PW Plant Sales, Adree Coach Trim, ABR Signs, MCN Rallying, F. Reilly Agrispares, Gaughran Bros, Luxe the Experience, D.T Auto, Sola Energy and BAHA Irish Whiskey.

Eamonn would also like to thank all of his loyal, and to welcome on some new sponsors; 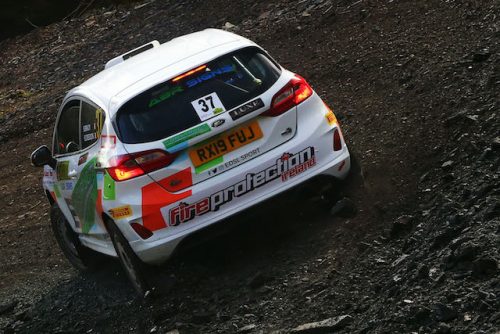