Boland, 25 years old from Wexford in Ireland, will tackle his first mainland UK event at the opening round of the season after spending much of his short career on the closed road events on the Irish lanes. An outing at Rallye Sanremo in 2020 shows the intent of the youngster for progression and this year he throws his hat into the ring to try and win one of the biggest prizes in rallying – a prize drive on a World Rally Championship event in a Hyundai i20 N Rally2.

“I started rallying in 2017 and had been working my way up to doing the Irish Tarmac Rally Championship last year, but of course COVID stopped that” says Boland.

“Craig Breen had suggested going to Sanremo as it was a good event to experience and there was nothing going on at home so we headed out there. Sadly we clipped a wall and they didn’t have the re-start facility so it was short lived, but enjoyable”.

“I’d always had my eye on the Junior BRC as its a mixed surface championship and that was of course important for my career. It just seems like the perfect time to have a go and see what we can do”.

Boland and co-driver John McCay will join the strong field of Juniors all aiming for top-spot in the series, but have a hurdle to climb during the year.

“I’ve got no gravel experience at all” he says.

“We will get a test before we go to the Nicky Grist [first gravel event] so its not totally alien to me but it will be a steep learning experience. I’m at home on the tar though and Oulton Park is a great place to start the season for me. My karting experience will help around the circuit and the aim is to head towards the mid to front of the pack although I know the competition is tough. I’m really excited for it”. 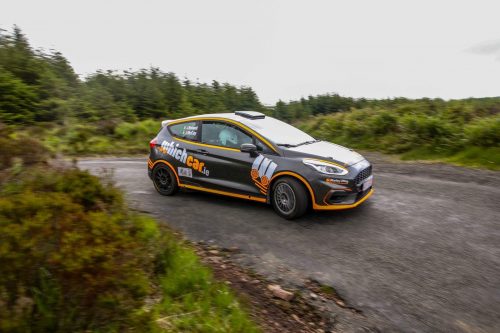