Despite sealing the honours, Pirelli-supported Edwards couldn’t keep up his 100 per-cent win record as a puncture on the penultimate stage slipped him down the order, but a vital top four place finish on the opening round of the weekend gave him enough points to secure his first BRC title. The latest visitor to the top step honour went to Scotsman David Bogie and Irish navigator John Rowan in their Skoda Fabia R5.

The penultimate round of the Prestone MSA British Rally Championship was played out on the Thursday and Friday stages of Dayinsure Wales Rally GB with nine tough and demanding stages providing the first gauntlet for the weekend.

Rhys Yates stole a march on the opening night with a spectacular show on the Visit Conwy Tir Prince spectator stage. However, when the rally shifted to the forests of north Wales on Friday, David Bogie was the man on the move and the Scotsman punched in six fastest BRC stage times to fire him to his first victory of the season in Britain’s top-tier rally series. The DMACK driver mastered the conditions and showed his class as his stage times rustled the feathers of some of the World Championship regulars.

Matt Edwards said: “It’s how the box-set will look with my picture on the front cover! That’s all I’ve been bothered about! It’s amazing. It hasn’t sunk in yet. We had a nightmare over the last two hours and the last two stages. It’s tried its best to undo us but we’ve got there. Huge credit to everybody who’s been behind us over the last three years and obviously Swift Group and Pete Smith have done an amazing job for us getting everybody behind us.

“With Pirelli tyres too, that was a big thing – having the tyres to do the job. I went into today perfectly calm. I knew we had the ability to just drive it through and get it there but I just caught a bank on the Tarmac and it undid a couple of bolts on the back end so it misbehaved for a bit but we strapped it up and got it back here.

“There was never a moment where we didn’t think that we could do it. It’s nice to have the confidence to do the job. Neither of us panicked and we took the decision to stop and change the tyre because we knew we had enough in hand to do it and not jeopardise major damage. We had the presence of mind to do what was needed. I’m overjoyed, as you can imagine. We need two days stress-free and we’re going to go and enjoy ourselves in a fantastic car on fantastic stages and it’s an absolute privilege to be in this position. I’ve no doubt that there are people out there faster and I’ve just got to count my lucky stars that I’m still doing it.

“What Darren (Garrod) has brought is the experience to be able to give me more confidence in what I’m doing and confidence that the notes are good. I can go at every stage, even those I’ve never done before – I just believe they’re right and trust in him and the car. It’s just a massive team effort.”

David Bogie said: “We always knew the championship was going to be a tall order coming into this weekend but we did what we had to do and it’s good to get a win – I’m looking forward to the next two days. We had a puncture on the Brenig/Alwen stage and then we caught Matt (Edwards) on the last stage, which cost us a bit of time, but he let us by. I wanted to win the BRC but I also wanted to score well on the rally. We’re going to push hard over the next two days. If we feel comfortable, we will push.  Today’s been a really nice pace and we’ve made no real mistakes. We’re desperate to get back out there and get back at it.”

Four was the magic number coming into the weekend and In the Prestone MSA Motorsport News Junior BRC it was no different. Both William Creighton and Kevin Horgan retired on the opening day – sadly forcing them out of the title fight.

Welshman James Williams in his Vauxhall ADAM R2 won his second round of the season and first event on gravel – slashing the deficit to Norwegian Steve Rokland, thus pushing the title fight into the final round of the weekend. Michelin-supported Rokland does have the upper hand and only needs another seven points to secure the series and with it a test with the Hyundai Motorsport team in one of the latest R5 cars.

The fiercely competitive Cadet Cup also had four drivers vying for honours on the Rally of Legends. Jordan Reynolds came into the double-header with a strong grip on the series and the young Englishman made it even more comfortable for himself by chalking up a second in the class behind an on form Finlay Retson. Other finishers, Bart Lang and Johnnie Mulholland ensured their hats stayed in the ring for the final challenge of the year.

Spencer Wilkinson was relishing the tough and demanding stages and the Subaru Impreza was ideally suited for the wet and slippery conditions. The Englishman with Glyn Thomas in the co-driver seat only needed a finish on the opening round. Taking their first top ten in the BRC allowed them to take the Production Cup honours for a second year in a row.

John Morrison and Peter Carstairs in the Kumho-shod Mitsubishi Evo 9 struggled at the start of the rally with gearbox gremlins but rectified them to continue their Rally GB adventure into the final round of the season.

The final round of the season will take in the final two days of Dayinsure Wales Rally GB with the BRC season ending in spectacular style on the streets of Llandudno on Sunday afternoon.

All results subject to FIA approval 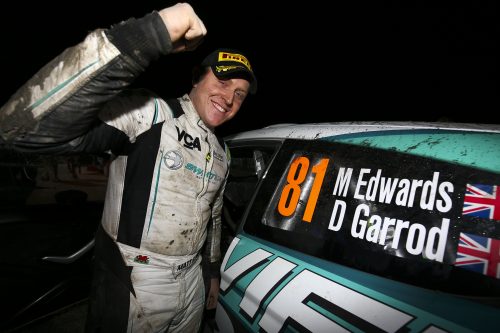