Twenty-eleven BRC Champion David Bogie has driven a multitude of rally cars over the course of his decorated career, from a front-wheel drive Vauxhall Nova to rapid rear-wheel drive Ford Escorts with a few appearances in a monstrous Group B Metro 6R4 thrown into the mix – just a small sample from his impressive CV.

There was one type of car which is on every rally driver’s, and in fact every rally fans list – that is to strap themselves into one of the latest-generation World Rally Cars.

Select few have had the pleasure and the multiple Scottish Rally Champion has now ticked it off the wish-list. Bogie has worked closely with reigning WRC manufacturers’ champions M-Sport to help prepare its striking Ford Fiesta ahead of world championship events. We will let David pick up the story from here…

“The first opportunity came as a last minute thing. All the M-Sport drivers were away on other events and the team needed somebody to shake a car down ahead of a rally.

“It was an honour to be asked and what helped me was not only my location – being just up the road in Dumfries, but my experience in a number of cars from front, rear, Group N, R5 and WRC.”

After receiving such a phone call, most would be bouncing off the walls, but the ever-professional Scot had an important job to do and got straight down to business with the Cumbrian firm. So what does the dream job entail?

“We shake the cars down with a variety of tests to make sure everything works before they send it around the world.

“It’s at this stage that everything’s gone through meticulously and thoroughly, as its better to iron out problems before you get to an event. The engineer sits in with me and we make sure everything on the car is doing what it should. Getting the car up to working temperatures, paying particular attention to the differentials and the transmission as well as making sure the boost levels are accurate.

“Once it’s all warmed up, we make sure the cars accelerate cleanly, brake in a straight line-up, handle like it should and pull through the gears nicely. This saves the team so much time at an event and the drivers can get straight into the cars only having to worry about event-specific set-up changes.”

Bogie fulfills similar roll for Carlisle-based firm CA1 Sport ahead of BRC rounds and enjoys perfecting everything in preparation for an event.

For M-Sport, the 31-year-old has driven almost every evolution of the current car from the early test machine right the way through to Ogier’s World Championship winning car.

The question we all want to know is… what are these top-spec WRC cars like to drive?

“They are just unbelievable! As far as a top-flight rally car goes – they don’t come much better than the Fiesta. Its acceleration and out-and-out grunt is just phenomenal and then there’s the grip. With all the aero, there is so much of it through the chassis and you can really feel that. Even in gravel specification on Tarmac there is so much grip. You turn in and accelerate and its incredible, you take time yourself to get psychologically up to speed as you forget just how quick they are. I have a massive smile on my face after every session – you just can’t help it when you drive these things!

“It is great to work with M-Sport as it’s not only enjoyable and a fantastic opportunity but its great to be a small part of the team. It’s very rewarding when you see Sebastien (Ogier), Elfyn (Evans) or Teemu (Suninen) succeed.”

David Bogie will be hoping to return to Britain’s premier rally series when the 2019 season gets underway with the Cambrian Rally on 16 February. 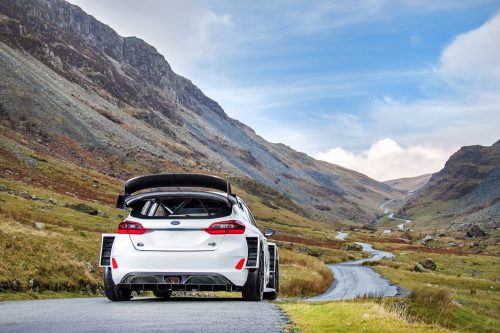