Scottish star David Bogie is ready to unleash an assault on the Prestone MSA British Rally Championship in his striking Skoda Fabia R5.

The 2009 champion is set to return to Britain’s premier rallying series in a DMACK-shod Fabia as he hunts his second domestic title. Last season, the Scot won his home round, the RSAC Scottish Rally, after a ding-dong battle with teammate Fredrik Ahlin. A sizeable off in Belgium put paid to his 2017 season but David is eager to return to his happy stomping ground.

“The BRC is where I want it to be,” explained Bogie. “The main attraction is the good mix of Tarmac and gravel events. You have an ERC level event in Ypres, WRC event with Wales Rally GB, a trip to Ireland – it ticks a lot of boxes. The experience I have gained over the last two years I think will enable us to go back and fight for the championship.”

Having contested the previous two seasons Bogie feels well equipped for the challenge ahead in 2018. With the Scottish star and his Czech machine on song, never discount the 30-year-old from the BRC points summit.

“I don’t have a game plan as such but to win the BRC it will need a mix of having consistency and the pace to run right at the front and I have proved that the past few seasons. You have to consistently score well in every round to be in the hunt at the sharp end and we want to be fighting for the win on the Borders right from the off. It’s a round I really enjoy, the stages are fantastic. Hopefully there will be no disadvantage to running first on the road or further down the field so we can have a good clean fight to get the season underway.”

And the CA1 Sport drivers ambition for the new season? Simple…

“ I have one BRC title to my name after our 2011 success and I am desperate to add another and what better way to start a new season than by kicking off the year in Scotland.” 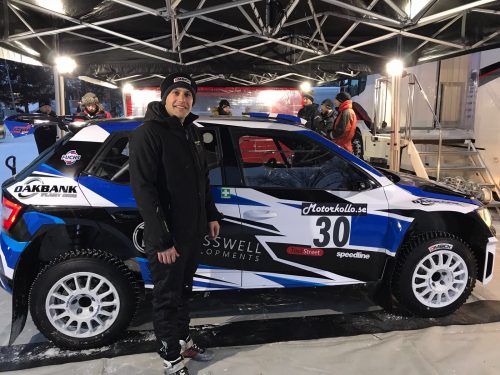